Share All sharing options for: Week 11 in the Non-Con: What I Want

I want to see Adam Weber and MarQueis Gray demonstrate why each should be the starting quarterback.  I want to see the running game pound the smaller Jackrabbit (yes, that's the SDSU nickname) line.  I want Minnesota to be up by such a comfortable margin that even if the Jackrabbits brought alum Adam Vinatieri out of stands to kick a game-ending field goal, it would only close the gap to a three touchdown defecit. 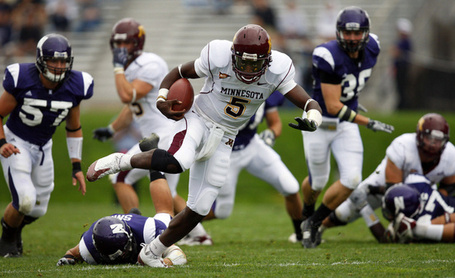 Make sure to go back and submit your picks for Week 11 of the Obligatory Predictions Contest. Weekly winners get a chance to write 500 words on the site.

I want Minnesota to play withe the fire they showed in the second half last week.

Minnesota to clinch a bowl berth with a win that is closer than it should be.

The Big Ten is 30-10 (.750) out of conference.  The league is 5-8 against BCS Conference teams (plus Notre Dame). Indiana's loss to Virginia guarantees that the Big Ten can finish with no better than a .500 record against the other BCS schools.  The league has two losses to non-BCS teams (Northern Illinois over Purdue and Central Michigan over Michigan State).