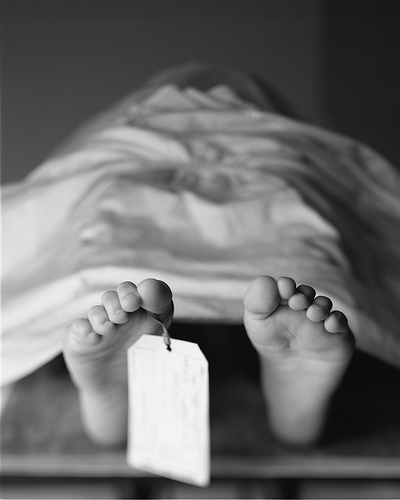 Bob Ufer, the paternalistic patriarch that commanded the airwaves for five decades in Ann Arbor, wrote a famous poem that likened Michigan's surprise 24-12 upset of the 1969 Ohio State Buckeyes -- a team Woody Hayes would later call his best -- to an ironic funeral procession: "Oh They Came to Bury Michigan, But Michigan Wasn't Dead."

Forty years later, I have to ask whether Ufer's resurrection merely prolonged the inevitable.  The once proud maize and blue has sunk into the soft wet earth, an expressionless program silenced by progress and frozen in time.  When I think of Michigan today I see a corpse -- a cruel, and unfamiliar face, hollow cavities soaked in iodine, and pale fists clenched in a lonely resolve.

No, I don't really think the winningnest program in all of college football is really dead.  But I do think that some part of the past is gone forever.  The big shoulder pads, turf stuffed cleats, chalk hands, and thick necks of our great nemesis have been replaced with a skinny, Circus like array of silk-stockinged trapeze artists.  Michigan may soon be revived, but it will never be the UM I remember.

Here, in the cold fluorescence of the college football morgue, let's take a look at what's lacking in vital signs for our rival:

The University of Michigan used to be a proud and well-groomed member of the college-football aristocracy.  Save for a few accusations of favorable admissions treatment, Ann Arbor coveted its status as a successful and straight program.

Recently, ESPN announced that a May internal audit revealed that Rich Rodriguez failed to keep mandatory logs of the time players spent on football during the 2008 season.  Before the season, the Detroit Free Press accused coaches of extending NCAA limits for practices and workouts.

If last year's 3-9 effort, and this year's (current) 5-6 record are the fruits of illegal workouts, I'd hate to see what the maize and blue would look like on a normal weekly practice diet.

And as if that's not enough, Athletic Director Bill Martin recently admitted to pulling a few punches on naive student ushers who failed to recognize His Holiness en route to the booster boxes.  As Mr. Martin exclaimed in response to one co-ed's request for identification, "Honey, I am the athletic director."

Too bad it's not 1929.  Bill Martin and Tom Buchanan would have gotten along swell.


The architect of the Big House renovations must have been the illustrator of the popular Tar Beach children's book because the new stadium looks like a black asphalt lot in Bed Stuy.  Every time I see this sh*tty haunted house on television with it's giant carbon press boxes I cringe.  Somehow, $226 million in upgrades translated to an ackward, top-heavy venue that still isn't loud.

How do you fix having the ninth ranked total defense in the Big Ten in 2008?  Hire the freshly ousted Greg Robinson from Syracuse.  If a 10-37 overall record (3-25 in the Big East) doesn't scream talent, I don't know what does.  Under the command of this mellow yellow, Michigan's defense has ran in place, collapsing against every offense with a pulse that knocks on its spongy doorstep.  With its new, innovative schematics, the Wolverine secondary is as soft as a hot buttered roll, and slow as a tortoise.

While many have suggested that Robinson just needs another year to ingratiate his system with the players, I think we're primed for another cycle of "too little, too late."