Who in the heck was that?

Share All sharing options for: Who in the heck was that?

I was at The Bank (TCF Bank Stadium) on Saturday evening for a Halloween Gopher match-up with the Michigan State Spartans.  I was sitting in the top row of the upper deck (as a side note, still great seats).  I was wearing layers of warm clothing.  I was wearing a Gophers stocking cap (a tuque for you Canadians).  I was surrounded by other Gopher fans, and I was two sections away from a large group of Michigan State fans.

As I walked out of The Bank the scoreboard read Minnesota 42, Michigan State 34.  I saw all of these things with my very own eyes. 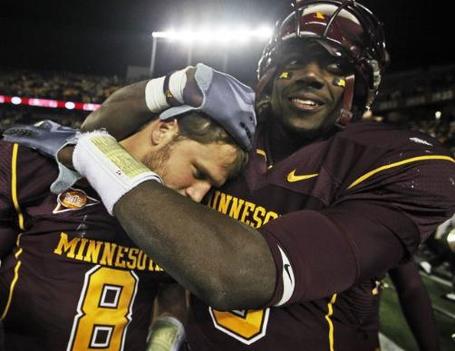 I also saw Adam Weber throwing to 6 different receivers.  I saw Nick Tow-Arnett lead the team in receptions.  I saw Da'Jon McKnight emerge as a Gopher receiver.  I saw the Gophers get yellow-flagged 17 times, and I saw those penalties cost them 157 yards.  Again, I saw all of these things with my very own eyes, so I have to believe that they happened.

Graham made a compelling case for benching Weber...

I talked last week about optimism leaving Gopher Nation after Decker went down...

But there is something else that I saw with my own eyes that I am just not sure I believe...

And do you know what that does?  That blows my mind.

On a Halloween Night at The Bank, Adam Weber blew my mind.  I'm not so sure that that wasn't somebody else masquerading as Adam Weber on Halloween, because the dude who threw for over 400 yards and 5 touchdowns was not the same guy we have seen lead our offense for the past five games or so.

... Adam Weber threw for 129 more yards in this single game than he did in his last 3 games COMBINED?

... Weber threw as many TD's against MSU (5) as he did against the Gophers previous SIX opponents?

... Weber had the game of his life WITHOUT Eric Decker?

But do you also realize...

... Saturday's game was Weber's only game this season over 300 yards?

... Weber has thrown an INT in 6 of 7 games this season... his only non-INT game was against Air Force, where he also did not throw a TD?

So again, I have no idea who that guy was wearing Weber's jersey on Saturday, but whoever he was, I'm glad he was there.