Yes, the Big Ten season is over.  Sure, Wisconsin and Illinois have a game left.  Yes, Illinois has two more chances to let their inner Zook shine.  But, the conference schedule is over and so are the regular seasons of nine teams. As you'll see, not much changed for the Big Ten's slotting. 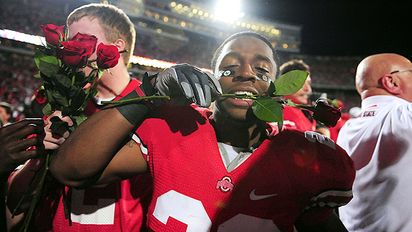 The Pac-10 had the biggest weekend.  Oregon's win all but assured that the Ducks will line up against Ohio State in Pasadena.  It should be a good matchup - one that the Buckeyes should win.

In the Big 12, there are two upcoming games of note for Big Ten fans.  Oklahoma can end their instate rival's dreams of a BCS at large berth win a win over the Cowboys next weekend.  Texas can do the same for the newly crowned Big 12 North "Champion" (if you prefer, "skinniest fat kid") in two weeks.

We'll have the full projections back next week.  Right now, let's just look at the BCS and Big Ten bowls.