The media has spoken, and they say that Donovan Warren, Brandon Graham and Zoltan Mesko (his royal punt-ness) are all Big Ten first team.

It may come as a surprise to some that, for a team that finished 9th in the Big Ten in total D, two of the 11 best players in the Big Ten on D played for Meeechigan.

However, if you were a team that played against Meech this season, your chances are pretty good that your QB knows what Brandon Graham's breath smells like. Fear. With 25 tackles for loss, the senior defensive end led the Big Ten in that category, and generally pitched a tent in the opponents' backfield all season. He's a monster, as well as the very definition of a true Michigan Man for always playing his heart out during a nightmarish junior and senior season for Michigan football. With the requisite full Michigan bias, I also believe that Brandon Graham deserves to be an All American, and should be if all is well and right in the football universe. BG said in an interview that he cries after games, but then on Mondays went out and took care of business. He can wipe his tears with the enormous pile of money he's going to get as a first rounder's signing bonus. 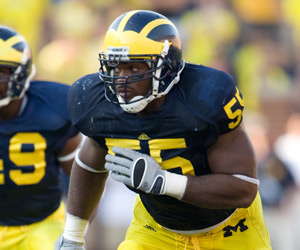 Last season, D Warren had some "disagreements," with then D-coordinator Scott Shafer, a general whiny attitude along with fairly inconsistent play. This season he's really matured and has become a leader on the defense. He's finally playing at the level that was expected of him when he was ranked a unanimous 5-star prospect coming out of Long Beach, CA. D Warren's most telling influence this season can't really be quantified by a statistic, mostly because teams generally didn't throw at him. This was especially true when Boubacar Cissoko was playing (and a Michigan student, whoops!). Thank the sweet lord D Warren will most likely be back next season; our D needs the help. Well done, Donovan.

If there was any beneficiary of our incredibly inconsistent offense this season, Zoltan Mesko was it. He was able to use that tritium-powered bionic leg of his to deliver the ball to the other team when our offense didn't beat him to it. Mesko's yards per punt average was 44.5 yards, first in the big ten. Zoltan is also a high achieving student; he's maintained a 3.61 GPA in one of nation's top business school (have I also mentioned our top ten medical school, our top 5 law school, our #1 social work and public policy schools...). Mesko is also up for the Ray Guy award as the nation's best punter (as he was last season). He can also kick saturn: 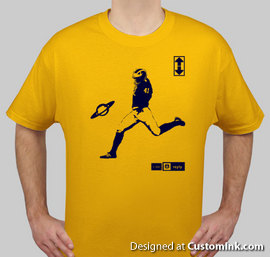 I want this shirt. Sadly, Mesko did not make the all big ten first team in banner touching.

All I can say is thank goodness it's basketball season, friends...