Share All sharing options for: Week 13 in the Non-Con: What I Want

We have favorites and we have loyalties, but if the Big Ten is going to climb out the national perception doldrums, we're going to have to do it together.  That means that we have to all be pulling in the same direction. Here's what I want to see from each Big Ten team in their non-conference battles this week. These columns started before the conference season and go on after the conference season...

Illinois faces the daunting task of competing against the undefeated Cincinnati Bearcats.  Can they win? Probably not...but that's why they play the games. Cincinnati has shown weaknesses: most glaringly, their ability to stop a running game.  If Illinois can pound the rock, or at least get Juice moving his feet forward, they could score on Cincinnati.  And if Brian Kelly is thinking more about the drapes he'll want to install in South Bend, well...stranger things have happened. 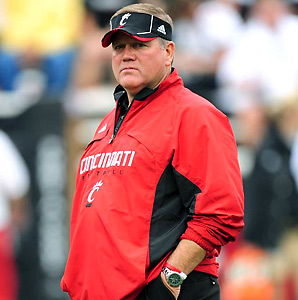 Should the drapes have shamrocks or that interlocking "ND" logo.  What if I had both?  Nahh...that would look tacky.  How many cheeseburgers do I need before I fit into the Charlie Weis mu-mu sweatshirt.  Wait, focus on the Illini.  Don't want "Outcoached by Ron Zook" in the second paragraph after I get hired...

Make sure to go back and submit your picks for Week 13 of the Obligatory Predictions Contest. Weekly winners get a chance to write 500 words on the site.

I want Illinois to show why so many thought that they could be an 8 win team.  Shock the Bearcats.

Illinois to roll over and lose interest shortly after half time.

The Big Ten is 31-10 (.756) out of conference.  The league is 5-8 against BCS Conference teams (plus Notre Dame). Indiana's loss to Virginia guarantees that the Big Ten can finish with no better than a .500 record against the other BCS schools.  The league has two losses to non-BCS teams (Northern Illinois over Purdue and Central Michigan over Michigan State).