Part 1, Discussion of Michigan's QB Situation: Tate Forcier Should Start in 2010, Denard Should Be Moved To WR

Share All sharing options for: Part 1, Discussion of Michigan's QB Situation: Tate Forcier Should Start in 2010, Denard Should Be Moved To WR

As Michigan fans weep softly into the offseason, it's time to ponder the future of the Michigan signalcallers. Tate Forcier excited the world early by beating Notre Dame, but struggled to a 1-7 record in Big Ten play amidst fumbles and INT's. He's not fast like Pat White, he's careless with the ball...but he certainly plays with some panache and guile. Denard Robinson looked lost in the pocket, lightning fast outside of it. Two freshmen QB recruits, both suited for the RichRod Spread, are coming in...and both are quicker than Forcier.

So what to do? Not only does our resident Michigan writer GregGoBlue believe Forcier will be the de facto starter, but he also wants to move D-Rob to a position that will utilize his athleticism. I tend to disagree, believing the RichRod spread will ultimately be more successful with a speedster at the helm. Following is Greg's hypothesis...mine will come next week.

Tate Forcier's QB rating this season was insane. 123.6 for the entire season. He's remarkably accurate, though his arm strength clearly has a ceiling. But when he's on, he's really f****** on. See: ND Game, MSU Game, IU game. Tate's got the elusive IT to lead a late game comeback and to lead a team. Though he's not the ideal running threat, he's got great scrambling ability (like when he juked that ND LB out of his jock!). 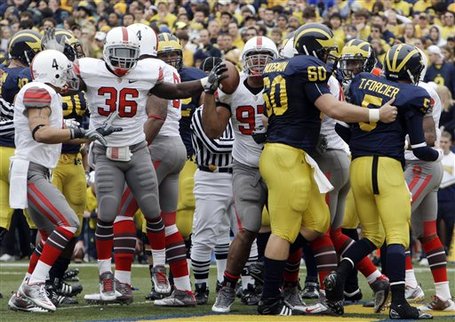 Tate also showed a remarkable propensity for freshman mistakes amid flashes of brilliance, which was expected. Holding onto the ball too long, not stepping into the pocket, making incorrect reads on the zone-blitz, holding onto the ball while scrambling like it was a loaf of bread, throwing into coverage, etc... The best things about these mistakes? They're all fixable. Outside of all these mistakes, Tate is a remarkably good QB. The best part? He's only going to get better. Hopefully these "arrrrrrgh, NO TATE NO!" moments will be mitigated next season as Tate spends more and more time under Rod Smith. Sure he's scrawny, but Barwis has often said the second year, not the first, is the year where players show the most development. But if anybody gets a solid hit on Tate, I fear for his life. Offensive tweakage to take advantage of the accuracy and less running? Fingers crossed. RR always said he wants 2 good quarterbacks who can run this offense. Who's the second? NOT Denard Robinson.

Even my mom could tell me what play Michigan football was going to run when DRob was behind center this season. Granted, DRob did not enroll as early as Tate, but the playbook for the "human turnover" was remarkably limited. Even as the season progressed, we saw little more out of DRob than "get the ball and run". What happened to the zone-read? What happened to the ideal QB for RR's offense?

It's pretty clear DRob struggled mightily with being at the QB position this season. For epic freakouts, see: every time he threw the ball. I think at one point in the season he was 1 for 4 with 3 interceptions or something. He's got the arm strength, no doubt about that. But this kid's ability to read coverage's as well as his accuracy need some serious work. He's not redshirting, obvi, so do we expect some miraculous improvement overnight?

Now that we've got Devin Gardner enrolling early and Cornelius Jones (who is leading upset after upset in the South Carolina state playoffs) coming in as well, we've got two primo athletes who can back-up Tate if/when he gets steamrolled. We don't need DRob anymore to back Tate up simply for lack of a human who can play QB on the roster (sorry David Cone). 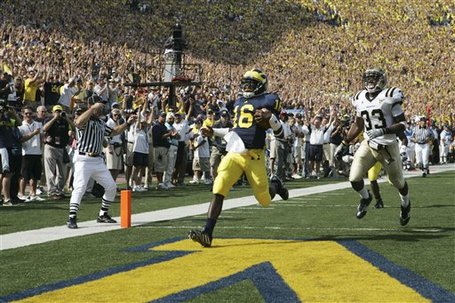 So What To Do With Denard the Quarterback Athlete?

My esteemed colleague would say that in an RR offense, you want your best athlete at QB. I say, your best athlete is no good to you sitting on the bench for 95% of the game!! When he's clearly not the best, or most effective, QB on the roster (anybody watching Meech football can tell you who the better of the two QB's is), he's not gonna play. Spot duty is ludicrous with an athlete like this; you want him out there making plays! Right now Noel Devine is the best athlete on the WVU team and you don't see him playing QB.

From DRob's limited looks at QB this season, we were able to determine a few things. 1) He's terrifying in space with the ball in his hands. 2) Whenever he has the ball in his hands, there's a 50% chance it'll end up in the other team's hands. Not a quality you want from a QB. I say, move DRob to SR/RB or DB now and get him started on the right track now. The question is where is Denard Robinson the most effective? Effectiveness is equally defined by optimal use of skill set of a player, and depth/need at a certain position. What is Denard Robinson? A freak athlete, yes. A QB, no.