Everything is clear.  Some things are clear as crystal.  Others are as clear as mud.  But make no mistake, the situation is clear. 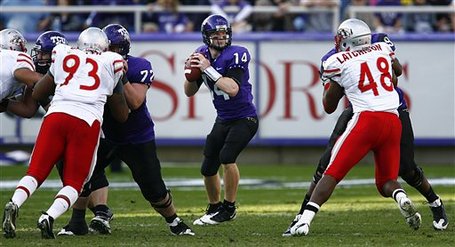 TCU will go to the BCS.  The BCS Championship?  Only with a couple of upset losses.

On the crystal side, the SEC Champ will play Texas, Cincinnati, or TCU in the BCS Championship Game.  I think that's the order, too.  If Texas beats Nebraska, they'll go.  If not, Cincy is next in line.  After playing the Pitt, they'll move ahead of TCU in the standings.  Should the Bearcats fall to the Panthers, I think TCU gets their chance.  I do not see a repeat of the SEC Championship game.  Not with one viable undefeated team in the clubhouse and two more approaching 18.  All in all, the 10 BCS teams are pretty safe bets. I've mentioned some alternatives, but I think that there are only 15 teams in play for the 10 spots.On the mud side, look at the SEC after the top 4 teams are placed. That's right, six 7-5 teams.

Good luck making any sense of it.  I took my best shot, but you can feel free to speculate in a different direction.  If you're counting, there are four open bowl spots for at large teams.  9 win MTSU and 7 win Bowling Green and Northern Illinois will take three of the spots. That leaves room for one 6-6 team to go to Mobile, Alabama to play the top choice from the MAC.  My guess is that it's UCLA.

Full projections of all of the Big Ten, BCS, and every other bowl game after the jump.