(Editor's Note: Never ones to welch, we present for your approval the musings of a real winner.  Having defeated us as our own predictions play this fan has earned the right to hijack the main page of The Rivalry, Esq. for his own purposes: in 500 words or less.  Want to be our next guest contributor?  Stay tuned for our Week 13 Obligatory Predictions Competition.) 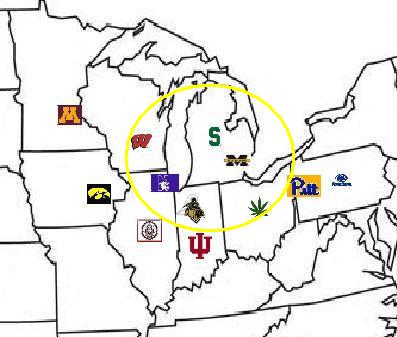 As a Buckeye fan sitting in the Michigan alumni section for Saturday's hatefest between these two traditional Big Ten powers, you can imagine some of the colorful things I heard (Graham wrote about a few of them here). One in particular got me thinking, though: as the seconds ticked away on Ohio State's 6th consecutive victory over Michigan and 5th straight Big Ten title, a Michigan fan turned to me and sneered, "Have fun getting your butt kicked by the Pac-10 and embarrassing us in the BCS again."

LB argues that two BCS teams from the Big Ten will doom our conference rep again.

It's no secret that Ohio State's recent struggles against Top Five opponents and the slide of the Michigan program into mediocrity have damaged the image of our beloved conference nationally. What's more surprising is the "little man syndrome" we seem to be experiencing internally: while we talk a big game, too often it feels like our conference pride is overcompensating for something.

Fortunately for us, there's a way out, a way to return our national reputation to the halcyon days of Woody and Bo, JoePa and Nile Kinnick.

We can expand the Big Ten.

Clearly, this isn't a revolutionary thought. According to the always trustworthy Wikipedia, no less than 12 teams have recently been discussed in the press or amongst fans as potential additions (including the laughable prospect of a Big Ten-Nebraska alliance). TRE has looked at expansion, and SBN partner Crimson Quarry has gone into great depth on the topic.

The best idea I've heard so far? A commenter at FanNation (in response to the ever popular Notre Dame-to-Big Ten conversation) suggested adding Notre Dame, Pitt, and Cincinnati to create East-West balance in the conference, a conference championship, and forever destroy the concept of the Big East as an automatic BCS participant.

Making the Big Ten a "Big Tent" just makes sense. By accepting schools that meet (or exceed) the conference's stringent academic requirements, we stand to create a conference of "super nerds" which would be the envy of all conferences not clad in Ivy. Finding schools who are consistently competitive in major sports would increase the level of competition in conference, expand the conference's grip on Midwest population centers, and go a long way toward repairing the damage done to the national image of the Big Ten as a powder puff league.

The reality is that the SEC, with its upcoming ESPN contract and swamp-based recruiting, will for the foreseeable future be the darling of the national sports media. The Pac-10, with its Fielding Yost-esque "point a minute" style of play, will always generate more video game-like statistics. Expansion wouldn't fix everything that's wrong with the Big Ten, but it would go a long way toward righting the ship and setting our conference at its rightful place as the cradle of football and the grandaddy of 'em all.