Share All sharing options for: Out of Our League - Why Two in the BCS Does the Big Ten No Favors

Some pundits were quick to declare the Big Ten the big winner, after Oklahoma State was slain Saturday at the hands of in state rival Oklahoma.  And why not?  The Cowboy's loss all but guarantees the league will place a second at large team in the BCS, netting the conference an extra $4.5 million bonus atop its usual $17.5 million dollar championship series payout.  Bowl proceeds are split evenly amongst the 11 member institutions, meaning athletic directors from Madison to Bloomington can rejoice at the prospect of an extra $409,000 allowance.

The problem is there's no free lunch.  By winning the earnings battle, we're losing the war of national respect.  How so?  Even if the Big Ten wins both its presumptive BCS bowls (Rose, Fiesta) in 2009, the conference is still likely to have a losing (3-4) bowl season.  We could just as easily go 1-6 in bowls for the second year in a row.

On the other hand, if the Big Ten had just one BCS bowl participant (like most other conferences), the same teams would have a great chance of going (5-2) in bowls.  How is that possible?  Read on.

It's Lonely on Top

Since the inception of the BCS in 1998, The Big Ten has had two representatives in BCS bowls eight times in eleven seasons.  By comparsion, the SEC has done it six times, the Big 12 five times, and the Pac 10 just once.  Neither the ACC or the Big East have ever sent two teams to the BCS.

Read that again.  Add in the unparalleled revenues from its own television network, and it's no surprise that the Big Ten remains the richest, most powerful conference college football has ever known.

But the bottom line isn't the only line in a competitive context.  Fans care a lot more about the goal line.  In that department, the league's struggles are well documented.  Of the eight seasons the Big Ten has sent two teams to the big dance, both have won just three times.

While that might not be so bad by itself, there's another consequence to double dipping: our non-BCS bowl matchups suffer.

Dating Up Is No Fun in Football

Imagine that you're a competitive, but young Big Ten program.  You win the games you're supposed to win, and lose the games you're supposed to lose, ending the conference season at 8-4 (5-3).  Your record earns you third place in conference behind Slow-hi-O State 10-2 (7-1), and Past itS prime U 10-2 (6-2).  Ordinarily, you'd be headed to the Outback Bowl to play the third selection from the SEC.

Guest writer LakeErieMonster likes the way the B10 looks with 14 teams.

But wait.  The Fiesta Bowl has extended an at-large bid to Past itS prime U.  Suddenly, you're "dating up," as the Capital One bowl has little choice but to select you from the Big Ten basket.  Good news for you, right?

And so it goes.

In at least six of the past 10 years, the Big Ten representative has come into the Capital One Bowl ranked lower than its SEC counterpart. 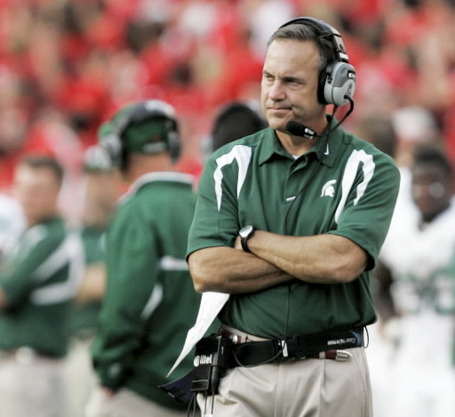 Mark Dantonio after Oklahoma scores to go ahead 35-3.

Even if the Big Ten wins both its BCS bowls (Rose, Fiesta), the conference is still likely to have a losing bowl season (3-4), with almost guaranteed losses in the Capital One, Champs Sports, Alamo, and Insight Bowls.  And that's giving the Big Ten two hardly certain victories against higher-ranked BCS adversaries (likely No. 7 Oregon, and No. 6 Boise State).  The conference could just as easily go 1-6 in bowls for the second year in a row.

But we deserve it, right?  We suck.

Not so fast.  Look at the difference an at-large bid makes: If neither Penn State nor Iowa is selected to go to the BCS, the bowl lineup suddenly becomes dramatically more manageable.  Iowa plays LSU in the Capital One.  Penn State gets Tennessee in the Outback.  Wisky takes on Clemson in the Champs Sports.  Northwestern gets Oklahoma in the Alamo.  Michigan State gets Missouri in the Insight.  And Minnesota is relegated to the Little Caesar's to play Ohio.

Suddenly, the Big Ten can lose in the BCS, and still have an overwhelmingly positive (5-2) bowl showing, with its only other loss in the Alamo.  If Ohio State wins in the Rose Bowl, the Big Ten could literally reserve its bowl fate with a 6-1 finish.

So the next time your uncle from San Francisco brags about the Pac 10's bowl record, remind him that his great league is dating down.  And if he persists, tell him his real beef isn't with the Big Ten, it's with the Pac 10's round-robin scheduling format that results in an extra, cannibalizing conference game.

And tell Jim Delany to quit laughing all the way to the bank.