Before we look forward, let's look back.  In early February, a certain writer on this very blog made these bold statements:

I still think that 2009 is the start of the return of the Big Ten. For a comparable year, look back to 2000. My guess is that no team goes 8-0 in conference. I also predict that no team finishes with less than 2 losses (and only Ohio State does that).

I envisioned a league in which Ohio State went 7-1 in conference, and everyone else dropped at least two games. Assuming that Iowa loses in Columbus next week, that's what we'll have.  As for the strength of the league, I'll put the Top 4 of the Big Ten up against anyone else in the country.  Beyond that...not so much. 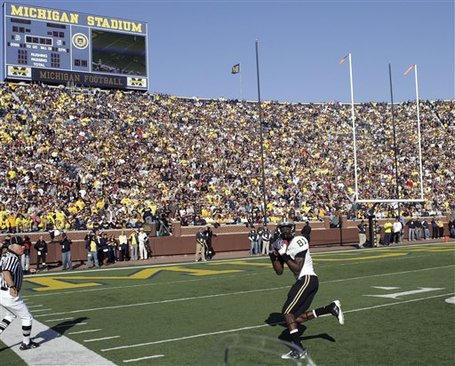 Big BCS shakeups this week.  If ever there was a year that two mid-majors go to a BCS bowl, this could be it.  I still think that the powers that be won't have it (Money, people.  It's about money).  We'll do another full projection next week, but for now the BCS and Big Ten Bowls follow after the jump.

Addendum: I, obviously, write these before the Sunday afternoon polls came out.  I was surprised at how far Iowa fell.  Assuming that they lose to Ohio State and beat Minnesota, it will be very close for them to make it back into the Top 14.  If they don't, you can swap Penn State (who should be safely in after two wins against Indiana and Michigan State) for the Hawkeyes.