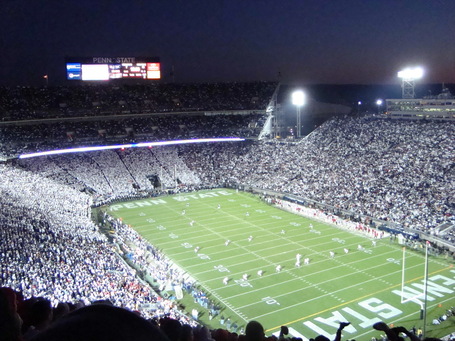 On Saturday, I left the creature comforts of the village by the Olentangy with friends and a fiance in toe, to head to State College for Ohio State's showdown with Penn State.  What follows is a brief re-count of our trip to Penn's Woods.

11:46 a.m.: We leave Columbus late after sitting for the morning MPRE exam.  Things started an hour and four minutes behind schedule, resulting in a stressful change of vehicle in front of M's carriage house.  She greets us with a box of fresh pastries from a local French bakery.  I change into my uniform: the Nike "Tressel" sweater-vest, complete with a Brooks Brother's undershirt and grab a cranberry scone.  We point the navigation to State College, PA, and learn that our projected arrival time is 5:04 p.m., some ninety minutes after kickoff.  We're down, but we're not out.  We've got a perfectly good second half to live for.

12:45 p.m.: Barreling down I-70, we learn -- first over the radio, and later from a phone call from Graham, that Iowa's Ricky Stanzi has gone down whilst rolling out on a naked bootleg against Northwestern.  The prognosis is negative.

3:01 p.m.: The sky is blue as we bolt through a tunnel into downtown Pittsburgh.  There's an unexpected commotion near Heinz Field, and we remember that there's another team in Pennsylvania that owns a one-loss record.  Alas, we have bigger fish to fry.

3:34 p.m.: With kickoff looming we scan the AM dial desperately for some resemblance of a broadcast.  Finally, we hit an undulating signal from a local Happy Valley station.  The signal rate drops in and out, replaced by a unrelated jazz overture.  Ohio State returns the opening kickoff to the 25 and it's on.

3:49 p.m.: Terrelle Pryor skips through a fold in the pressure and burns Navarro Bowman for a 7 yard rushing touchdown.  I smack my knuckles on the sunroof in jubilation.  After the Buckeyes force Penn State to another 3 and out, I declare to my passengers that we've come to play.  We're weaving through orange foothills and soft mountains, the open landscape punctuated by power lines.  It sounds like Ohio State's defensive front is having a field day with the Nittany Lions, a fact that makes me swell with hope.  An embarrassingly partisan radio announcer admits another Ohio State 12 yard gain.

4:14 p.m.: Graham Zug knifes through the Ohio State secondary for a 31-yard gain setting up a goalline standoff that ends when Daryll Clark holds the ball across the hash on fourth down.  I get a text immediately from a friend's girlfriend that the score is suspect.  We hold our breath, as the announcer concedes that "It's a close call."  The ruling on the field is confirmed.  It's a tie game, and I immediately second guess Tressel's decision to punt from the 29.

4:59 p.m.: With less than 3:00 minutes to play in the second half, and the Goodyear Blimp hovering like a winged seraph on the horizon, M announces that she has to pee.  We swing into a local Outback Steakhouse to do the deed.  The hostess comments on our choice attire, but lets us in.  Ohio State forces a Jeremy Boone punt with approximately 2:10 left.  I put my hands in my pockets, convinced we're headed to half up by three.

5:11 p.m.: Just off the exit we get our first glimpse of Beaver Stadium, a spaceship-like fortress nestled in a pastoral embankment beside the interstate.  The sun is glancing off the mountains, painting the landscape in a brilliant orange halo.  We swing into a non-permit space in the grass beside a local Hospital and bundle up as the clock expires on the first half.  We march off through farm land for the quarter-mile walk to the stadium.

5:19 p.m.: We check in on the north end and are greeted by a labyrinth of steel buttresses and concrete.  The sounds of the marching band move through the portals as we shuffle for the ramp to head to the upper deck.  I'm trying to be objective here, but I've got to say, the traffic management of this stadium sucks.  We've forced to zig-zag back and forth through the packed concourse, smashed between iron girders and chain link safety fences.  The air is sweet and stale with sweat and hot dog buns.  We earn our way to Section NKU, and finally, break out into the open space.  Beaver Stadium is alive with madness, a white brimmed monster of hollow sound and fury.  We climb up to the 92nd row and are greeted by the familiar faces of friends.  I survey the twin-press boxes, and the natural grass surface.  A colleague hands me a Camel Pak filled with rum and tells me to "Bite and Suck."  I do, and am warmed to the core.  The steel bleachers move with the swell of anxiousness.

5:39 p.m.: The second half kicks off and it's us against the whiteout.  We hold the Nittany Lions on another series and I comment to a friend about the play of linebacker Brian Rolle.  "He's everywhere," my friend responds.  Ohio State gets the ball back and after a string of rushes and an incomplete pass pins Penn State at their own 13.  "Ten points," says my buddy "won't be enough to win this."  I agree without hesitation.  Turns out, we were both wrong.

6:17 p.m.: Pryor steps up in the pocket, turns his shoulders and heaves a "Hail Mary" up into the sky.  I immediately go numb -- wasn't it Woody Hayes that said only three things can happen when you throw the ball and two of them are bad?  The long ball floats and bobs, as a free safety and cornerback close on the left side of the field.  DeVier Posey waits and STEALS THE PASS AT THE LAST SECOND, I jump with estranged joy as Posey darts through the secondary and INTO THE ENDZONE.  We roar from the high decks, trading high fives and singing low taunts of elation.  We're up 10 points, and for the first time I think we just might have the game.  The thought is electric.  Our D is back on the field and they're playing off the momentum, dancing jigs behind the line of scrimmage.  Beaver Stadium belongs to us. 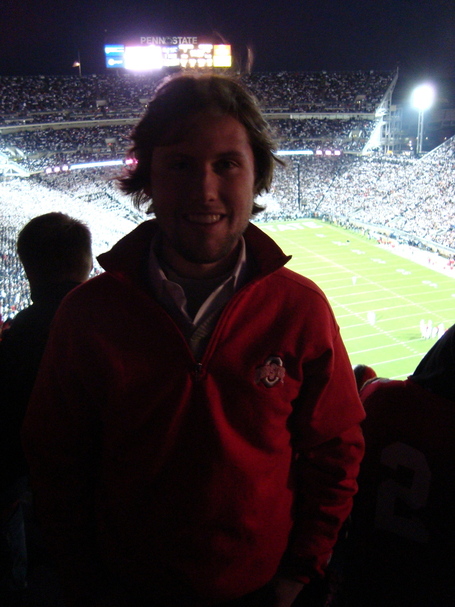 6:27 p.m.: And just like that Ray Small blows through another leaky Nittany Lion coverage scheme for 45 yards back to the Penn State 47.  Jeremy Boone makes a killer knee-cap tackle that saves the touchdown.  Pryor takes the reins again, and after a short handoff and incomplete pass we're facing 3rd and 11.  The student section is re-energized after the Buckeyes call a timeout, and I let doubt eclipse my mind for a brief second as we line up 4 wide.  Pryor moves forward on the keep, and as he charts the open space to the left hash I see an outside linebacker is keyed in on the play.  Pryor glides, flashing his trademark motionless moonwalk, and beats the defender to the sideline for the first down.  Seven plays later we're in the endzone, after Pryor dishes the ball to a leaping Brandon Saine.  It's right in front of the visitor's section, and we go nuts as Penn State fans fill the aisles.  Confident in the seventeen point lead I throw out a few hypothetical titles for this article to a friend, including the admittedly insensitive: "You Are...Losers."

7:01 p.m.: After an Ohio State interception, and the usual clock-killing pleasantries, I wait for the clock to hit zero before snapping the iconic scoreboard photograph. 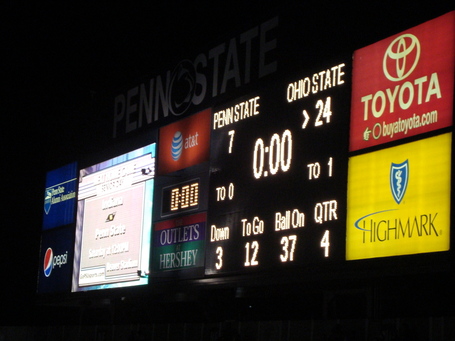 That would be this one...

7:25 p.m.: We file out of the stadium, singing "We don't give a damn for the whole state of Michigan."  (Love it or hate it, Ohio State is probably the only fan base that would rip Rival A, after beating Rival B).  With the advice of a few helpful locals we wonder over to College Avenue, the backbone of a handsome New England downtown with shops, restaurants, and (of course) bars.  We wait in line for a table at Bill Pickles Tap Room, a game day oasis with tudor-stylings, plentiful LCD feeds, and craft-beer by the pitcher.  I drink a Leinenkugel's, and scarf down a soft pretzel, while we draw envious stares.  The locals are friendly, even concilatory, and it's clear everyone is all in for the Big Ten.

11:48 p.m.: With designated driver M at the helm, we hop into the car and head east to Altoona -- the nearest available lodging.  We buy a six-pack of Yuengling from a bowling-alley bar, and settle down at a local inn, strangely complacent with the Big Ten championship just a week away.