Share All sharing options for: The Rivalry Is Watching You: Indiana MLB Matt Mayberry v. Iowa

A huge thanks to Jason from Chicago for the tip to watch Mayberry.

I hope you enjoy this week's "Watching You," one week late but still relevant. When you think of Big Ten linebackers, Sean Lee, Bryan Rolle, Navorro Bowman, Pat Angerer, and Greg Jones instantly come to mind. Apparently MLB Matt Mayberry of Indiana has flown under the radar, so I wanted to watch him against the power running of Iowa on October 31. How would he react to the Hawkeye's physicality? Was he an oasis of talent in the bare bones of Indiana's LB / secondary corps?

Indiana scored first, taking a 7-0 lead. Keep this in mind.

The Hoosiers are running a stilted 4-3, leaving 7 in the box and hoping to slow Wegher early. MM is at his usual MLB spot. There is little blitzing early because the Hawkeye's are slowly power rushing down the field. For whatever reason, the Hawkeyes are running away from MM, but when they do, he makes a play. A simple off tackle run throws 280 lb Riley Reiff into MM's way - Mayberry smacks him aside and stuffs the play for a short gain. On a Stanzi dropback, MM gets an excellent bump on the receiver and drops smoothly back into coverage. Eventually the defense stiffens and Murray misses a 40 yarder. 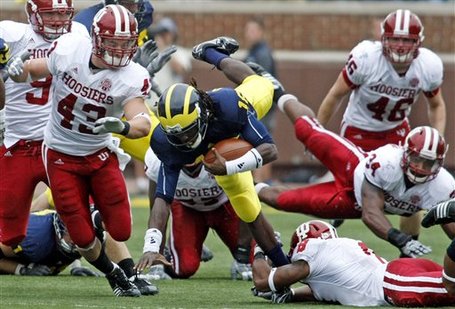 Second possession and MM begins to lobby for an All-Big 10 spot. After standing up the 210 Wegher on first down for no gain, Mayberry picks the perfect time to blitz and picks up a sack. A Stanzi pick ends the possession. The Hoosiers have allowed zero points in the first quarter and have withstood some early smashmouth football.

A third possession showcases the quickness of MM. He blitzes again, avoids a block with some nifty lateral movement, and gets a QB hurry. I realize that Pat Angerer is higher on NFL boards than Mayberry, but Mayberry is quicker. It bears mention that the IU defensive line is pressuring Stanzi too, allowing MM to roam around freely. Punt time.

Iowa, sensing they are being beat up at the LOS, switches to zone read runs. This leads to...nothing much more. MM has six tackles by now and the off-tackle runs have been corralled. It takes until the third quarter for any semblance of a Hawkeye run game to show up. Towards the end of the quarter, Stanzi throws a couple solid deep balls and Wegher punches it in to make the score 21-7 - MM got manhandled by 280 lb. OL Rafael Eubanks on the touchdown.

We go to the half...6 tackles, one sack, one quarterback hurry, 7 Hawkeye points. I'd also like to point out that Indiana had a cornerback named Donnell Jones. Some halftime entertainment then? Donnell...

Iowa begins run faking and rolling out on almost every play - the Indiana outside linebackers are biting, but not MM. A second down blitz by Mayberry and he almost gets his second sack. After Stanzi drives the Hawkeyes 40 yards, his first pick of the half ends the drive.

An Indiana punt follows, but another Stanzi pick stops us from viewing MM's progress. At the base of Indiana's success is slowing Wegher - now that he's ineffective, the zone is deeper and harder to throw against.

The crazy apeshit Pick Six makes the score 21-14, followed by the controversial non-touchdown to Turner. 24-14 Hoosiers. Stanzi is sacked at the onset of the third possession of the quarter and then MM get's an interception with an assist from the referee, who screens the Iowa receiver. MM almost has the Holy Defensive Trinity (sack, pick, fumble recovery) and most definitely has good agility.

Avert your eyes, Indiana fans, the fourth quarter from Hell is about to begin. Stanzi connects for a 92 yard touchdown and MM can only watch helplessly as the safety blows coverage badly. Safety went man and everyone else went zone. Damn you. 24-21 Indiana.

Anddd a different safety blew coverage on the next offensive play for the Hawkeyes. Touchdown, 66 yards, 28-24 Iowa.

On Iowa's third possession of the fourth quarter, fatigue and momentum combine to hamstring Mayberry. Wegher runs for 8, 4, 4, 4, 6 yards on five consecutive runs. MM has a bad missed tackle where he simply bounces off the ball carrier and then over pursues lazily on the touchdown while Wegher flies by. 35-24 and we're all set here.

Game Discussion: Played like a man possessed in the first half, standing up blockers and ball carriers while running sideline to sideline. Along with the strong defensive line, was a key to stuffing Wegher early. Got tired in the fourth quarter after the Indiana secondary fell apart and squashed momentum.

Mayberry Discussion: CBS has him listed in the Top 25 of senior LB's in the nation and I won't argue. 6'2'' and 237 pounds will get you a look at the NFL, but so will a mature and physical approach to playing football, which MM has. His agility is excellent and he doesn't rely on hand fighting with offensive lineman, choosing instead to swim move or body up to them. Loves hitting, just like Angerer, Jones, and Lee Campbell.