A Lament: You'll Be Coming Down

Share All sharing options for: A Lament: You'll Be Coming Down

The Iowa Hawkeyes are 9-1 (5-1).  Somehow, in the aftermath of Saturday's loss to Northwestern, that's been lost.  Their record is what I predicted prior to the season.  They still control their own destiny for a Big Ten title and a Rose Bowl berth.  And yet, Saturday's loss still leaves an empty feeling that I'm still struggling to explain. 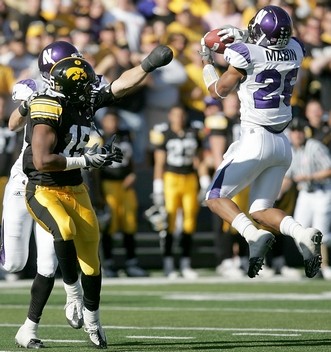 It's not that Iowa lost.  Lord knows, I never really believed that Iowa would go undefeated.  I had planned out the article talking about the number of good Iowa teams that saw dreams crushed in Columbus.  I never stopped knowing that this magical run would end against Ohio State.  It was fun to dream, but that's all it ever was - nothing real.  And yet, there was something about this season.  "This is a special team," my wife said before the Michigan State game.  Of course, she was right.  And that's why it hurts so much.  It's not that it ended; it's that it wasn't supposed to end like this. 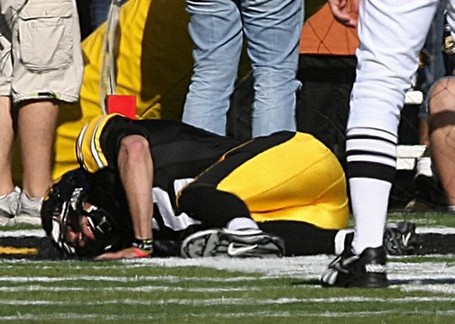 It wasn't supposed to end like this.  Not with an injury.

But, this one was too much.  Coming off of the best two quarters of football he had played all year, Ricky Stanzi's injury proved to be one that the Hawkeyes could not overcome.  Maybe here is the lesson from the close wins over UNI and Arkansas State.  You need some blowouts.  You need to get your backup quarterback a chance to play.  If you can't do that, you'll see regrettable, yet understandable, performances like the one that James Vandenberg provided on Saturday. 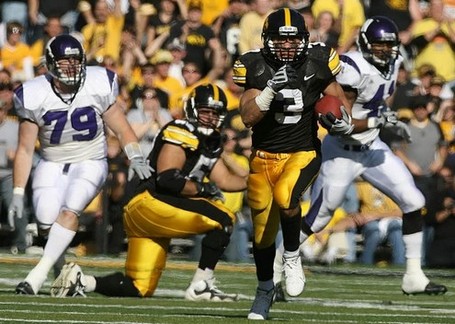 It wasn't supposed to end like this.  Not with a phantom holding call.

Look ref, I watched Rafael Eubanks's block over and over again.  It was clean.  He had two hands in front of the defensive lineman.  Eubanks pancaked him.  He never lost front-to-front forward-moving contact with him.  He never pulled him down.  When they showed the replay, Bob Griese's response was perfect.  "Wow.  Not much to see there."  He probably wanted to say that Eubanks flattened him like a Panchero's quesadilla, but realizing that "Rafael" sounded Hispanic (and newly retrained by Disney) thought better of it.  The call negated Brandon Wegher's 63 yard touchdown run and a 17-14 3rd Quarter Hawkeye lead.  Somehow I knew at that point that it was over. 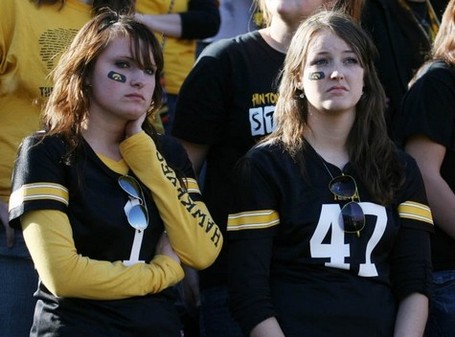 It wasn't supposed to end like this.  Not with double schadenfreude upon the Hawkeye fans.

Throughout the miserable 2007 season, and again in the first five games of 2008, the Iowa fans were relentless in their negativity toward Jake Christensen.  He was a golden boy who washed out.  He had an NFL father, a 5-star ranking, and expectations of the fan base put upon him.  And he failed.  Yes, he had horrible circumstances.  Yes, he did what he could, but before the halfway point of last season, it was apparent that the less-heralded Stanzi was the better quarterback.  The four wins that ended the campaign cemented his role as the team's starter.  Jake transfered to Eastern Illinois, a 1-AA school, so that he could play during his Senior year.  Flash-forward to Saturday: do the Hawks lose if Jake Christensen comes into the game in the second quarter?  I'd have liked their chances for victory a lot more.  To rub it in just a touch, there were reports that Jake was at the Hawkeyes' game on Saturday; it was EIU's bye week.

Finally, for two straight season, the Hawkeyes' fans have been relentless toward Penn State.  Yes, Iowa has won 7 of 8 times that they have played this millennium.   Yes, Iowa reveled in ruining their season one year ago.  And yet, we ignored the chirping from Northwestern.  It didn't matter how the pesky Wildcats - far inferior to our mighty Iowa - had won three of the last four contests.  They were justNorthwestern.  And just one year after Penn State's foil spoiled the Lions' perfect season, Iowa's foil spoiled the Hawks' magical run. 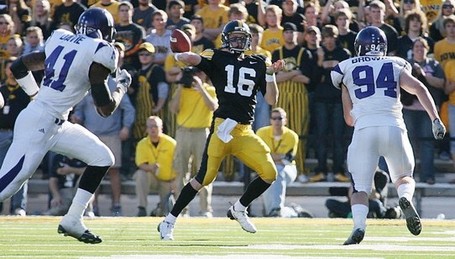 My wife and I attended the Alabama/LSU game on Saturday.  In the 4th Quarter, as yet another Tiger was helped off the field during an injury timeout, they announced several scores from around the country.  The SEC fans dutifully cheered as they announced Notre Dame's loss to Navy.  They announced Iowa's loss next, and the cheers were louder.  My wife's eyes teared up at that point.  Not because Iowa had lost.  We had come to grips with that already.  But for a moment, even fans in the isolated SEC cared about Iowa enough to root against us.  For a brief moment, Iowa REALLY mattered.  And when we woke up Sunday morning, Iowa didn't anymore.  That's the part of the ending that hurts the worst - and it's that emptiness that is going to take a long time to fill.