Share All sharing options for: Insight Bowl: A Quick History

They say that those who ignore history are doomed to repeat it.  So what exactly does that say about the Minnesota Gophers football squad returning to the Insight Bowl for the third time in four years?

We'll get to that another time.  As for today, what is the history of this bowl? 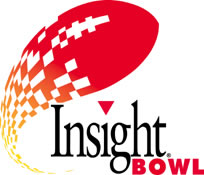 The Insight Bowl is the third incarnation of the name of the bowl that started out as the Copper Bowl in 1989, then changed to the Insight.com Bowl in 1996 when Insight Enterprises took over the naming rights.  The game has been called the Insight Bowl since 2002.

The Big Ten got involved with the Insight Bowl in 2006 when the game began to feature a match-up between our beloved conference and a Big 12 school.  That, of course, was the year Texas Tech staged the biggest comeback in Division I bowl history, coming back from a 38-7 deficit mid-way through the 3rd quarter.  That utter collapse also proved to be the final straw in Glen Mason's undoing as head of the Gophers. 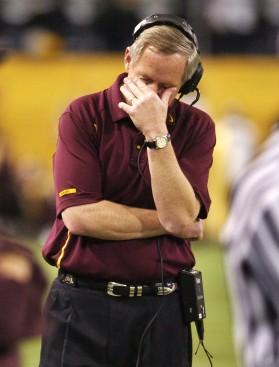 The reality of the situation is that, outside of the first two and a half quarters of the 2006 Minnesota v Texas Tech Insight Bowl, the Big Ten has not been competitive in this game.

Gopher fans and Big Ten fans alike can agree on one thing, that needs to change this year.