PSU v LSU in the 2010 Capital One Bowl: Is this the most intriguing non-BCS bowl of the season?

Share All sharing options for: PSU v LSU in the 2010 Capital One Bowl: Is this the most intriguing non-BCS bowl of the season?

Things that make non-BCS games interesting, interesting meaning "this game will draw my attention even though I have a family and the stakes aren't particularly high":

- NFL-caliber players on either side of the ball

Assuming that none of you gamble, I would argue that only a handful of non-BCS bowls really stick out to me using this or any other criteria. Stanford-Oklahoma (who wants to watch a white person succeed from the running back position? ME - oh and millions others)...Miami (FL) v. Wisky (Fast v Slow?)...Virginia Tech-Tenn (maybe in 1999-2000)...OSU-BYU (Lots of crisply thrown short passes)...and of course Penn State-LSU in the Cap One. When pressed, I put my slight Big Ten homerism to the side and think that it's either Stan-OK or PSU. 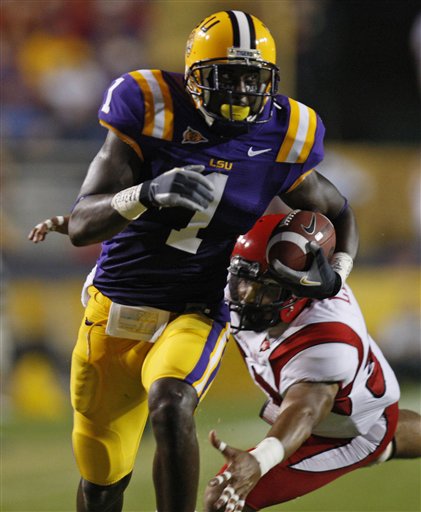 A fellow writer on TRE believes that this game is, quote, bo-ring...Presumably because of the thought that these two excellent defenses will pile this game into an unwatchable 13-10 clusterf*** with 400 total yards and zero memorable plays. It's not about points scored or points not scored for me. It's about 2 things.

1) When I switch my TV to the Cap One Bowl, I'll feel like I'm not only watching two monster programs (Linebacker U v the third best program of the 2000's), but I'm witnessing solid 2009 squads. Here are the teams that have defeated PSU and LSU: Floribama, Preseason Top 5 Ole Miss, OSU, and Iowa. That's money baby, that's decent coaching helping avoid big upset losses to teams like Georgia and Indiana.

2) When I watch the highlight montage at the onset of the broadcast (a must for getting the adrenaline pumping), I'll see Bowman, LaFell, Peterson, Lee, Clark, Royster, Scott...and I'll feel the excitement one feels when NFL-caliber talent is displayed on a college field.

So tear this game down for no reason, Jason King*, and I'll get giddy as that NFL bound linebacker takes on that NFL bound halfback at the goal line during a nailbiter.

*Links to BSD, who is so tired of King's ineptitude they couldn't even muster enough energy to fisk him...Which is understandable.