The Enemy of My Enemy, Part I: The Rose Bowl

Share All sharing options for: The Enemy of My Enemy, Part I: The Rose Bowl

As we begin preparing for the year in which the Big Ten shocks the college football world by winning five of its seven bowls, let's learn about the opponents.  Oh sure, we could turn to the fans of our opponents and ask them questions about their beloved cats, birds, and bees.  But this site was founded upon the idea of rivals.  That's why we're talking with our opponents' rivals. After all, the enemy of my enemy is my friend.

As we look at the Rose Bowl, AndyPanda of the outstanding Oregon State blog, Building the Dam, was kind enough to answer these questions that we had about the hated Oregon Ducks. 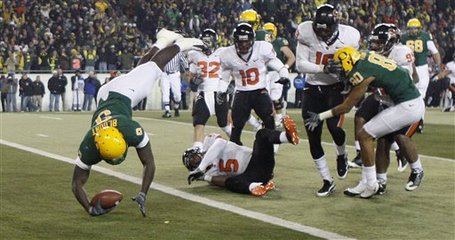 1.  What schemes worked best for you on defense against Oregon's motion Pistol, spread sweeps, and zone read attack?

The key to contending with Coach Chip Kelley's spread option read offense is to play assignment football, and maintain gap and assignment discipline, and do it all night long. A traditional style pro defense. You cannot over-pursue, and one step can be too much, as the speed Oregon has will run into, or cut back thru, any gap a mistake opens.  The Ducks' offense is predicated on option reads, and Jeremiah Masoli is a master at quick recognition and decision making.

Masoli isn't an exceptional thrower, but he is good enough to capitalize on an assignment error, as was evidenced when OSU's James Dockery over-committed on Jeff Maehl, and there was no safety support. The result was an immediate over the top 73 yard touchdown.

And while Masoli is rightly known for his running ability, his reads can just as easily result in someone else being the star. With cornerback Tim Clark already out with a broken leg, all conference Keaton Kristick missed only one play with a tweaked wrist. Masoli immediately sent LaMichael James thru where Kristick and Clark would have been for a 52 yard touchdown.

Those two plays, one break down, and one where a personnel vulnerability existed, were the difference in the game, producing over a quarter of the Ducks' total yards, and underscoring how important it is to maintain discipline against Oregon's offense on every play.

A variety of blitzes and stunts will happen. The Oregon linebacking crew of Eddie Pleasant, Casey Matthews, and Spencer Paysinger are fast enough that they can come from anywhere, and if an offensive line releases to pick up the blitz, Tukuafu is strong enough, and Rowe is fast enough, to recover despite being initially stopped, and still make the play.

A sustained power running game can work against the Ducks, as Stanford demonstrated, but it must start with an effective passing game that pushes back Oregon's back seven. The key to overcoming the Duck defense is to prevent them from running toward the line of scrimmage, which allows them to capitalize on their speed.

3.  The Beavers put 30 points up on the Ducks in the first 35 minutes of the game.  The final 25 minutes saw the Beavers only get a field goal.  How was OSU able to dominate the Ducks early, and what did Oregon do late to turn the tide? 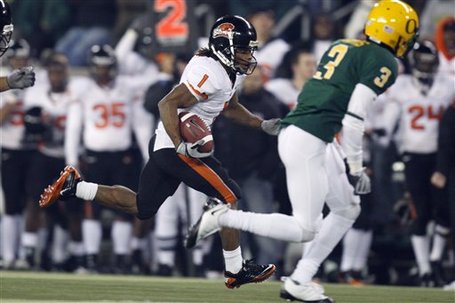 Early on, Oregon St. quarterback Sean Canfield was on, and by completing a number of passes, was able to keep the Oregon defense backpedaling much of the time, not attacking the line of scrimmage.

What Oregon did in the second half was keep the ball away from Oregon St. The Ducks are known for being a quick strike offense that doesn't need a time of possession advantage to generate points and wins, but few teams will win a firefight against the Rodgers brothers and Canfield. Against the Beavers, the Ducks played defense with their offense.

Oregon knew the best way to curb the Rodgers are to have them standing on the sidelines as much of the time as possible. With a boost in their power running game from LeGarrett Blount, Oregon held the ball for about 18 and a half of the last 26 minutes, and over 13 minutes in the last 17 and a half minutes. The Beavers only had one fourth quarter possession.

So limited in their number of opportunities, the weather, in the 20's, resulted in a couple of dropped balls off receivers' hands, resulting in a field goal instead of a probable touchdown, and another stalled drive. And the difference in the game when the Ducks were able to keep the Beavers' offense off the field for over six minutes at the end of the game. Both Kenjon Barner and Masoli won individual matchups, where the OSU defense was in position to make the play, and one on one, just got beat. The Ducks converted three fourth downs in the game, two on the final drive.

4.  Much of the rest of the country looks at Oregon as having fashion models, not football players.  Has the Oregon fan base embraced the Phil Knight-ification of their football team, or would they rather focus on the game?

The Oregon fan base loves Uncle Phil, who epitomizes the high dollar image most of them aspire to. And if any aspect of the image in any way causes a distraction of any sort, that's just another advantage they gain. 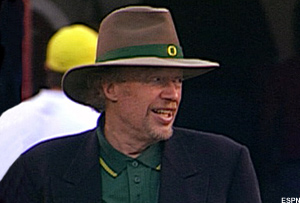 Admit it.  You wish he went to your school.

5.  What can Buckeye fans do in advance of the game to most annoy Oregon fans?

Remind them of the Stanford and Boise St. games, where they were physically dominated, then talk about how good Washington is going to be soon. It doesn't matter if Washington actually will be good or not; they hate the Huskies, almost as much as the Huskies hate them. Or talk about how college football games should be "dry" events. [ed. note: The Rivalry, Esq. does not and cannot endorse dry sporting events.  We encourage Buckeye fans to use the other recommended methods of criticism] 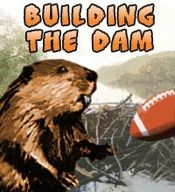 Thank you again to AndyPanda of Building the Dam.  We wish the Beavers the best of luck in beating the hell into BYU in the Las Vegas Bowl.