The Enemy of My Enemy, Part III: The Outback Bowl

Share All sharing options for: The Enemy of My Enemy, Part III: The Outback Bowl

As we begin preparing for the year in which the Big Ten shocks the college football world by winning five of its seven bowls, let's learn about the opponents.  Oh sure, we could turn to the fans of our opponents and ask them questions about their beloved cats, birds, and bees.  But this site was founded upon the idea of rivals. That's why we're talking with our opponents' rivals. After all, the enemy of my enemy is my friend.

Don't forget to go back and submit your Bowl Prediction sheet for another chance to win a prize. For winning the regular season OPC, Seattle Hawkeye won...a hat. You may win...something cooler. Hardest bowls to pick so far are Stanford-Oklahoma and PSU-LSU.

As we look at the Outback Bowl, PeteHoliday of the outstanding Alabama blog, Roll Bama Roll, was kind enough to answer these questions that we had about the hated Auburn Tigers. 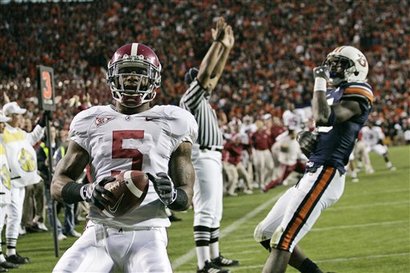 1.  Much has been made about Auburn offensive coordinator Gus Malzahn's desire to run his offense at an uncomfortably fast pace (not just the plays, but the time between plays).  Yet, while watching Auburn lose to Alabama and Georgia, their offense didn't seem to move any faster than a typical spread offense that lines up without a huddle (such as Kansas, Texas Tech, or even at times - Northwestern).  Is this all much ado about nothing?

Yes and no. By and large, Auburn's office just isn't going to run much faster than your average spread offense. Part of that is because, at times, there's only so fast you can push a football game. Part of it is that [former Auburn head coach Tommy] Tuberville did not exactly leave the cupboards stocked with top talent. The Auburn offense has the potential to move with a lot of speed but, in practice, they're not really able to execute that particularly often. Next season, or the year after, might be a different story but, at least for now, you're not going to see Auburn push any game-speed (or player-speed) envelopes.

2.  Auburn seems to fit squarely in the mushy middle of the SEC.  What distinguishes them from those 5 other 7-5 teams?

Frankly, not a whole lot. One defining characteristic of the middle of the SEC this year has been highly suspect defenses. Auburn's is about as suspect as it gets. They have an offense which has, at times, put points on the board and a defense which has been taken advantage of in every conceivable way. Then again, that could describe any number of middle-of-the-road SEC teams. Of course, all of that is non-responsive to your original question. The one thing that separates Auburn from the rest of the pack -- as any Auburn fan will be thrilled to tell you -- is that they led the current #1 team in the country for 3 full quarters (just don't ask how that fourth one turned out). 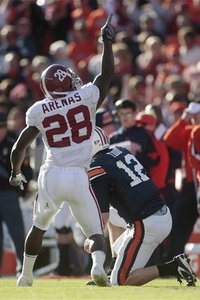 3.  A fundamentally strong defense was a cornerstone of the Auburn squads that were successful under former coach Tommy Tubberville.  Does Auburn's current defense have any particular strength?

The key advantage of Auburn's defense is that opposing offenses might become complacent and over-confident from watching game film and fail to prepare as well as they should. In all seriousness, though, I'm sure their defense has some strengths. Maybe they're very good at pinochle?

4.  Our Northwestern writer wants to know: If a Wildcat fan attending the Outback Bowl (and I assure you, there will be at least 40 of them in attendance) runs into an Auburn fan at a local watering hole, what topics should she discuss to most annoy Tiger fans?

Here are 10 questions you can ask an Auburn Tiger to annoy them:

1. Ask how their Sociology program is doing these days.

2. Ask if they ever managed to make it to any of the Delta Sigma Phi Halloween parties.

3. Ask how that whole accreditation thing worked out.

4. Ask if they finally managed to pass Georgia Tech in SEC championships.

6. Ask them if they have a midget handy.

7. Ask them to explain why their mascot is a tiger, but they fly an eagle around before football games.

8. Ask them why they vandalize their own campus after victories.

9. Ask them why so many of their students live in trailer parks instead of apartments.

10. When you're ready to really set them off, ask them what it's like to have to live in the shadow of one of the greatest football programs in the history of the game. 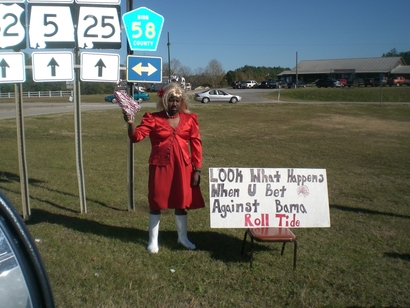 5.  We know, "SEC, SEC, SEC" and all of that, but surely you won't root for "that other team in the state," which would like nothing more than to end this new era of Crimson Tide dominance before it gets much further, will you?  Wouldn't you rather root for the nerds in purple, a loveable group of under-sized over-achievers who are trying to bring the school its first bowl victory in over 60 years?

This is a matter of some debate amongst Tide faithful, so I do not purport to speak for all of us, but there is a very large portion of the fan-base who cheers for Alabama and . . . whoever is playing Auburn. For my part, I want Auburn to lose at everything. Forever. SEC affiliation or no, you can bet that there will be a LOT of 'Bama fans cheering from those purple-clad nerds from Evanston.

Thank you again to PeteHoliday of Roll Bama Roll.  We wish the Tide the best of luck in givin' hell to Texas in the BCS Championship Game.