Share All sharing options for: Ohio State/Oregon: A Series History 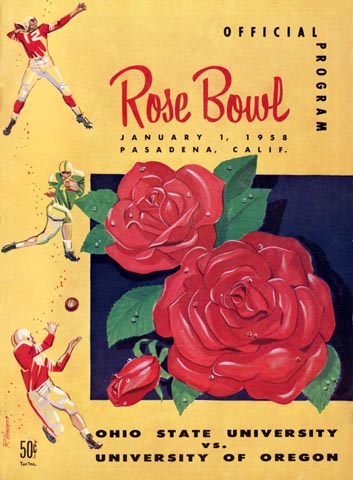 Winston Churchill famously said that "Those who fail to learn from history are doomed to repeat it."  In the case of Ohio State/Oregon that's just fine with me.  After all, the Buckeyes lead the overall series 7-0, earning wins in 1958, 1961, 1962, 1967, 1968, 1983, and 1987.  But before you declare that ignorance is bliss, light up a Montecristo No. 4, and go for an afternoon walk down New Bond Street in London's West End, consider another kind of history: bowl history.

Looking for a bit more contemporary coverage?
Check out my early preview of the Rose Bowl Game.

Ohio State is currently the paper tiger of the BCS, having dropped three marquee games in a row.  Along with its infamous softness against premiere competition, the Bucks have barely broken even (6-6) in the Grandaddy of Em' All.

Superstitions aside, Before the Bucks and the Ducks meet for the eighth time on January 1st, let's look at a lopsided series history, and see what we can learn from it. 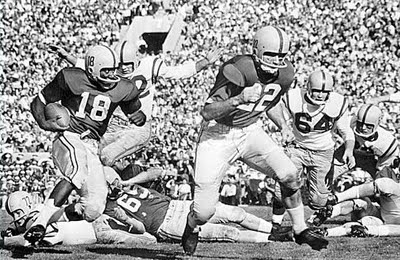 Although the No. 1 Buckeyes beat Oregon 10-7 in the 1958 Rose Bowl, it was the later who carried their coach, Len Casanova, off the field.  After all, Oregon entered the game as a 19 point underdog to the No. 1 Buckeyes, and stood up to the scarlet, ending the game with more yards of offense, and more first downs.  Oregon never punted.  Ultimately, the difference in the game was two turnovers, and two kicks from 34 yards — a miss, by Oregon’s Jack Morris, and a make, early in the fourth quarter, by Ohio State’s Don Sutherin.  As the Los Angeles Examiner noted, "Ohio State won the football game, but scrappy little Oregon won all the other honors in yesterday’s thrilling Rose Bowl classic, including the lasting respect of those who came to scoff."

Ohio State, of course, was voted National Champions by the FWAA, UPI, and AP polls. 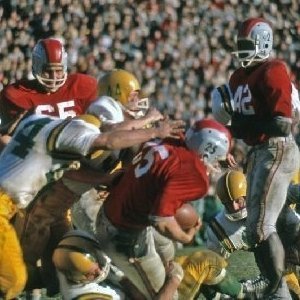 Astonishingly little information exists about the 1961 matchup, except for the final score (OSU 22, OU 12), the team rosters, and the above photograph.  What we do know is that the Buckeyes were offensive juggernauts in 1961, led by quarterback Joe Sparma (who was later a pitcher for the Detroit Tigers), fullback Bob Ferguson, Maxwell Award winner and Heisman runner-up to Ernie Davis, and the sophomore halfback tandem of Paul Warfield and Matt Snell.  Two first-round NFL picks (Bob Vogel and Darryl Sanders) led the offensive line at tackle.  As one historian reports, "The defense wasn't as heralded as the offense, but it was fast, aggressive, and smart, led by linebacker Gary Moeller, later the head coach at the University of Michigan."

Ohio State's victory was of little surprise since it had already strong-armed eventual Pacific Eight Conference Champion UCLA.  Interestingly, this was the season that the Ohio State University faculty council voted to turn down the Rose Bowl invitation. The faculty was concerned, "that football was becoming too big at Ohio State; that it was superseding the true mission of the school, and something had to be done to put the program in its proper place." 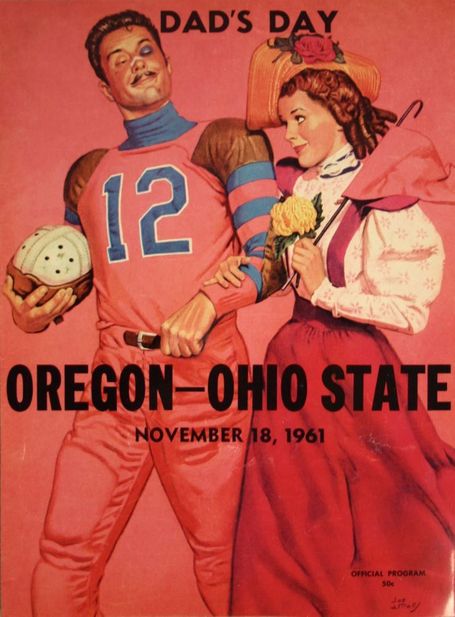 The following year saw Oregon again travel to the Horseshoe in late-November to face the Buckeyes.  The fact that the Ducks were forced to make the trip across the country two years in a row, without a reciprocal requirement for Ohio State to travel to Eugene, shows the historical disparity in influence between the programs.  The scarlet won in an even more convincing fashion than the previous year, coasting to a 26-7 victory in front of the home town crowd.

Although Oregon earned home field advantage in game four, the results were predictably patronizing.  Coming off a loss to Arizona, the Buckeyes -- led by future NFLer Dick Himes -- rolled at Autzen 30-0. 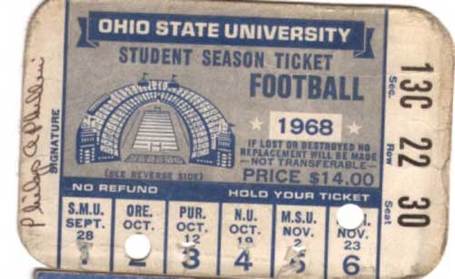 The series returned home the following season, where arguably the finest team in Ohio State history dominated Oregon 21-6.  The Buckeyes boasted 11 All Americans and 6 first round NFL draft picks.  Quarterback Rex Kern and running back Jim Otis would go on to lead the undefeated Buckeyes to a come-from-behind 27-16 Rose Bowl victory over the USC Trojans and the national title.

It would be fifteen years before the programs met again.

A low powered Oregon offense again suffered a commanding 31-6 loss to the scarlet, who went on to beat Pitt in the Fiesta Bowl.

The most recent game in the series is marked by a third quarter Ohio State rally that saw Vince Workman rush for 162 yards and a touchdown, and quarterback Tom Tupa pass for two touchdowns in one minute fourteen seconds.  Ohio State pounded Oregon on the ground, racking up 201 yards rushing, and 435 total yards in a 24-14 victory.

Which brings us back to the present...

What can we learn from seven, largely uncompetitive matchups?  Well, first, it's clear that Ohio State has been the favorite in every game before this one.  That's no surprise.  After all, Oregon hasn't had the most storied football tradition until recently.  Throw in the fact that five of the seven games were played during the two most dominant decades (1950s, 1960s) in Ohio State history, and that Oregon twice lined up against future national champions, and it's no surprise we've seen a lame duck series.

Each of Ohio State's predecessors have brought a solid offense to the table.  With the exception of the 1958 Rose Bowl, Oregon did not.  How bad were these Oregon offenses?  Well, in 1983 the Ducks famously tied their in-state rivals (Oregon State) 0-0 in the Civil War.  It was the last time an NCAA Division 1 game ended in a scoreless tie.

Sure, Oregon only kept things competitive twice, in 1958, and 1987.  But the one time they showed up with a unique attack -- the aforementioned Rose Bowl -- they caught Ohio State off guard.

If history tells us one thing it's just how close this Rose Bowl Game will be.  The 2009 Buckeyes lack the high powered attack the 1967, 1968, 1983, and 1987 teams took for granted.  They do however, have a line that can dominate like the 1961 team's did -- when our boys come to play.  Oregon, meanwhile, will bring the fireworks this time around.

Is it finally the Duck's turn to light up the scoreboard?