Here's the thing about this Big Ten expansion: it's going to be a big deal.  Otherwise, it's not going to happen.  If adding a twelfth team only add to the Big Ten coffers by 9.09% (or 1/11th of the current total), the deal is a wash.  The Big Ten isn't going to add a school and expand for a wash.  They will only expand if the expansion creates an increase in funding above and beyond what they would have received otherwise.  If 11+1=12, expansion won't happen.  11+1 must equal more than 12.

Now before you and tell me that the Big Ten will make big money from a title game, recognize that your point is ceded.  It will be a moneymaker for the league.  However, if the expansion does not increase regular season fees by at least 9.09%, each school will receive less money from the league during the regular season.  I will posit that if any part of this deal is a financial loss, it is not happening.

TRE is your one stop shop for all things Big Ten Expansion related...

Graham discusses pros and cons of adding a 12th team...and who it might be.

Chadnudj details the benefits of the North/South split

So stop thinking small.  Join me after the jump and start thinking Big.  After all, it's in our league's name for a good reason.

Remember, think BIG.  Here are the teams that I think by themselves can satisfy this requirement:

Yes, it's the league's white whale (and I appreciate it that the Irish again hired a coach who can personally live up to that moniker.). At the same time, it is still the most recognized name and brand in college athletics.  It would be a coup for the league.  It would be a perfect fit (and they'd find a way to get the Irish into the AAU; don't sweat that).  If Notre Dame would say yes (and they won't), this search would be done.

Do you remember that Texas reached out to join the Big Ten in 1993/94?  Shortly before the Horns and Aggies (along with the state's two successful piggybackers) joined the Big 8, Texas talked with the Big Ten about becoming the league's 12th member.  The Big Ten was under a self-imposed expansion moratorium, though.

Today, I don't see Texas joining.  They are the New York Yankees of the Big 12.  They have every conceivable advantage and limited revenue sharing.  Why would they leave that situation for long road trips (the shortest Big Ten trip would be longer than the longest Big 12 trip) and equitable payouts?  Do you think the Yankees would leave baseball's system for football's - where they would share (most of) their dollars evenly with Green Bay?  Texas is in a perfect situation.

Yes, the Big Ten wants to dominate the Omaha media market.  No, this would be about adding a football giant.  Tom Osborne, for one, would listen long and hard.  He's preached against the Southern-dominance of the Big 12 since its inception.  I don't know if the Huskers take the offer, but it's a much closer call than you might think at first blush.  And don't give me the "Big 8/12 founding member tradition garbage."  It doesn't pay the bills.

This is all about DC.  The ACC has the market surrounded.  The Big East has roots in the market (during hoops). The Big Ten can move on the area by adding the Terps.  It's a contiguous state, which could use the move to recruit in more fertile areas (Ohio and Pennsylvania).  Yes, Maryland is thought of as a basketball school first.  I don't think that stops the inquiry.  I don't know that Maryland jumps, but I bet they look long and hard at it.

Missouri has already said that they would entertain the offers.  Good for you, Mizzou.  Missouri feels like it has received a raw deal from the Big 12 in football each of the last three years.  The Big Ten would control, instead of split, the St. Louis market, while making an entry into Kansas City.  Of the adding one combinations, this has the greatest likelihood of actually happening.

Like I said at the outset, this isn't about finding a partner for Penn State.  In 17 seasons, the Lions have developed a nice rivalry with Ohio State and a hatred for Iowa.  They don't need to bring their little brother school into the family just to have someone to kick around.  Also, Pitt adds nothing but a 12th team.  If you believe me when I write that this expansion has to be about more than that, then you know why Pitt won't happen.

I'm late coming around on this, but Rutgers adds nothing but a 12th team.  Rutgers doesn't "give the Big Ten the New York market" any more than adding Middle Tennessee State would give the league the Nashville market.

They don't add anything but a 12th team.

Now you're just being silly.

An interesting article in the Tribune yesterday tipped the Big Ten's hand.  They're not limiting their thoughts to 12 teams.  They are also looking at the possibility of 14 teams in the league.  What?  Seriously?  Yes.  Who would this be?

How about Missouri, Kansas, and Nebraska.  Add those three to the league and you control the media markets of the upper Midwest and great plains states.  That doesn't add much.  But, you add one of the Top 10 football programs, one of the Top 10 basketball programs, and a legitimate contender in both.  That I find interesting.  How do these divisions strike you:

I like them, too.  I'm partial to the North/South alignment (playing each team in their division, their permanent rival across from them on the list, and one rotating school each year), but I wouldn't argue with the East/West breakdown either. It just doesn't lend itself as well to the split.

Would the three Big Twelve schools come together?  Yes, Kansas leaves K-State behind, but i don't think that they'd worry too much about that.  Coming together might make the move more palatable for the joiners.  I don't know enough about the numbers to know if it would make the league more profitable for the members, but my suspicion is that it would.

If you believe that the league will go for a more balanced geographic approach, maybe it's Missouri, Pittsburgh and Maryland.  Look what that could do:

When you add three teams, you're adding a championship game, but you're also adding 12 extra regular season games.  That's increasing regular season product by more than 25%, and likely adding a premium to the value.  It's a good deal for all involved.

Reread the money quote from the Tribune.  The league is also considering 16 team options.  What?  Sixteen?  What would that look like?  My friends, it would look like the start of a playoff system.

How would you schedule this for football?  Let's dream a bit.  Each team plays the three teams in their division, and four teams from another division.  The eighth game will be decided by standings and played on Thanksgiving weekend, with the first place teams facing off in the league championship semi-finals.  You could rotate what divisions face each other for full slates and what divisions meet head to head on Thanksgiving weekend.  Do you think that Big Ten semi-final weekend would get ratings?  TV Money?  Attention?

I know that this is a radical change from anything that college football has done.  And, I realize that these divisions will move away from the traditional rival system (thus, likely making it a non-starter). But, this is the time to think in these terms.  The stodgy Big Ten is allowing itself to dream right now.  It should be encouraged to think as big as it can.

Over the next 12-18 months, you'll read periodic articles focused on one small addition to the Big Ten roster. Remember that won't happen.  If expansion occurs, it will be because the Big Ten was able to get Bigger.

h/t on the title to Frank the Tank.

We never said what we were going to name this Bigger Big Ten. Sure, we could stick with the easy moniker and keep the Big Ten. Or we could go to the Big 14 or Big 16.  But we can do better than that. We need something that demonstrates our dominance in college football. Something that shows that we will not only compete with those Southern units, but that we will dominate them. Got it... 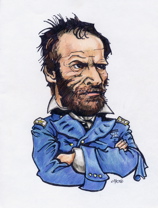