The Spartans held their official press conference for the Alamo Bowl on Friday. I attended as the microphone holder for a Channel 12 reporter. For those who attend pressers consistently and interact with players/coaches, it's just another meeting. Since this was my first one, ever, it was intriguing on a personal and philosophical level. 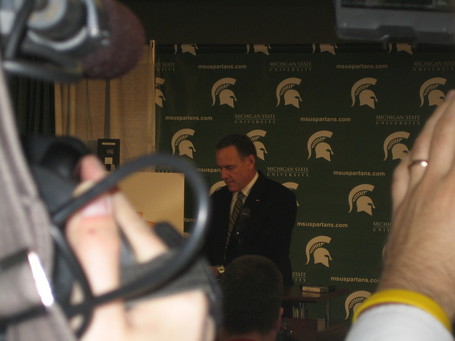 Coach Dantonio took questions and also served up the truest quote of the day. "Coach, what are you going to do with your backups getting significant playing time?"...to which Dantonio said, "We have football players. They are going to play."

TRE ranks the Big Ten bowls in chances of winning.

Judging the impact of the MSU suspensions.

It's impossible not to say possibly incriminating, embarrassing, or stupid things at a press conference. That truth leads me to another statement - If you think the male-female relationship is weird (and it is), the sportswriter-athlete/coach relationship is on the same weird plane. The media holds tremendous power, but at the same time, many have the air of a proud father or a weak kneed N'Sync fan around the athletes.

We watched Jack Ebling interview Greg Jones, who showed humbleness amidst his impressive accolades (1st team All-American, etc). Jones gave more insight into the frat fight which led suspensions - "When I hang out (with the suspended players), we don't talk about it much. I know how they feel so why discuss it?" 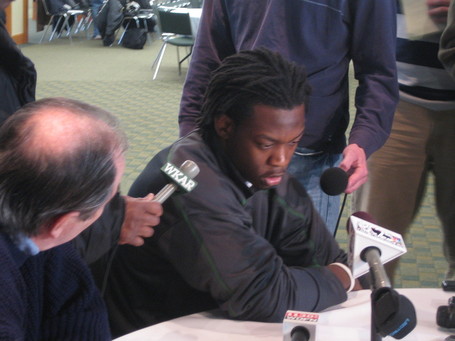 Apparently ESPN named Michigan State the least likely team to win a bowl game this season. I know this because it was brought up 333 times during the Q and A with the players. How's a player supposed to react? "You're right, sir, ESPN has a valid point and we'll be lucky to get out of there with a three touchdown defeat." Lot's of stupid questions were asked - but there were some great ones too. Kirk Cousins was challenged - "How are you going to react with inexperienced wide receivers? How will you lead?" Cousins said that he'll do what great quarterbacks do - make the wide receivers better and lead by example.

I learned something about Cousins too. He's intense, smart, and well spoken. Cousin's sincerity and warmth is rivaled only by Mr. Rogers. The first time I looked in his eyes, it was like the first time I heard the Beatles. (H/T to Superbad) 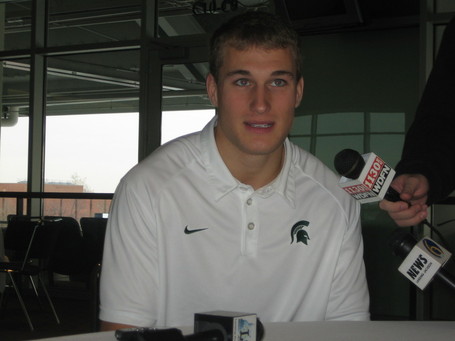 Anger seeped through some of the players statements. Blair White used the word "pissed" to describe his emotions toward the suspended players actions. White, who's went from walk-on to 1st team All-Big Ten and team leader, shared an emotion that was echoed throughout the presser: excitement at going to Texas. 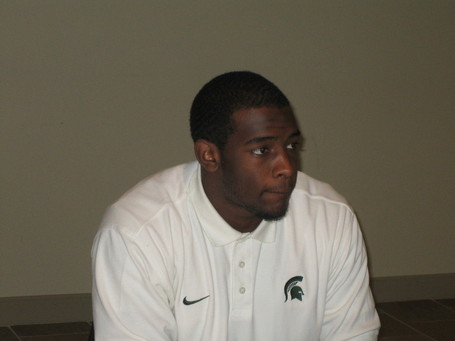 Larry Caper (above) shared that excitement and didn't seem phased at the thought of being a freshman who will get half the carries against TT, not to mention part of a team that's a 10 point underdog. "We can win if we execute," was his mantra.

It was surreal, asking questions and eating lunch with players I've written about all year. Weird thoughts ("I thought everyone would look bigger", "These pressers will pay off for the players via improved public speaking skills") seeped into my brain as I was surviving the somewhat monotonous Q and A. I'll leave with two thoughts: 1) Michigan State might get killed, but it won't be for lack of leadership. White, Jones, and Cousins bring that in spades. 2) In my mind, I don't kowtow to the players or idolize them especially. I'm far more interested in the schemes and the CFB culture. But it's the players that make this all go around.