The Gauntlet Has Been Thrown - and It Smells Delicious

Share All sharing options for: The Gauntlet Has Been Thrown - and It Smells Delicious 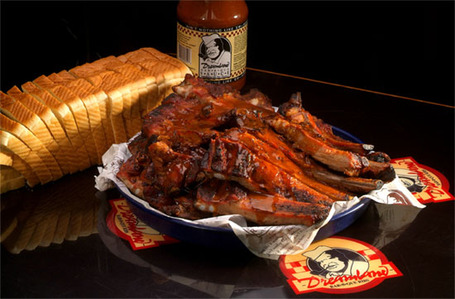 If you've read this site before, you know me as the Northwestern writer. You probably also know that I am currently a law student at Northwestern. What you may not know, though, is that in addition to making my home in the windy city I am also a born and bred Chicagoan. Okay, okay, that's not that shocking. Now anyone who knows Chicago knows that we loooove our food. Perhaps it's the bitterly cold winters or just the midwestern sensibilities, but we here in Chicago love all things culinary at least as much as (and probably way more so) than any other city or region in the United States.

As a lifelong Chicagoan, I've always been amused by that peculularily Chicago tradition of betting food on sports games. You see, up here, our mayor likes to engage in friendly wagers with opposing mayors whenever a Chicago team makes it into the playoffs. The terms of the bets he makes are simple. The loser sends the winner a heaping pile of food unique to their region after the game or series is decided. Over the years, that's resulted in some quite amusing show downs complete with spreads fit for Mayor Dale - er, a king - and amusing televised posturing.

Sports, egoism, and food. What could be better?

Now, granted, I'm no city mayor. But I am an amateur sports blogger, and that's pretty close, right? To that end, I decided to see if I could rope another SB Nation blogger into such a bet. I tracked down Jay from the SBN blog for the Auburn Tigers, Track 'Em Tigers. I sent him an e-mail proposing that we wager regional goodies on the outcome of the Outback Bowl between Northwestern and Auburn. Fortunately for me, Jay loves food just as much as I do and was extremely excited about the prospect of such a tasty wager. Of course, he foolishly thinks he's going to be the one enjoying food this year, but I digress...

The terms of our bet and some friendly smack talk from Jay after the jump...

Law Buck takes a look at what the Big 10 faces come this bowl season...

Bama Hawkeye interviews the Alabama Blog, Roll Bama Roll, for their take on the Outback bowl...

So once Jay agreed to our bet, I faced the daunting task of attempting to choose some food that would represent Chicago adequatley enough for a bet. This is a lot harder than you may think. Yes, Chicago has a lot of food to choose from... but that's just it. We have a lot of food. How is one supposed to pick from all the culinary awesomeness that is the Windy City? Deep dish pizza... cheesecake... gigantic chocolate cookies... italian beef sandwiches... pickled hot peppers... It's almost too much! But, then via some sports inspiration, it hit me. The perfect thing to bet on a sports game?

The Chicago hot dog. Of course.

I am huge fan of the Chicago hot dog. Trust me, you do not want to engage me in an argument on the merits of the Chicago style hot dog vs. other so called "hot dogs" in the country. It will not be pretty. I even wrote a college entrance essay many years ago on these such hot dogs (seriously).

Luckily enough for me, there are apparently enough ex-pat Chicagoans home sick for Chicago food that there is a whole cottage industry just ready to ship packages of hot dogs with all required to turn them into Chicago style dogs at your command. One of the restaurants willing to ship such goodness? Portillos, a name that should be instantly familiar to any Chicagoan. Should the Auburn Tigers somehow manage to pull out a victory over my Northwestern Wildcats, I will be sending Jay a box containing everything he needs to enjoy a Chicago hot dog feast... namely:

10 specially packed all-beef hot dogs, 10 popy-seed buns, mustard, onions, tomatos, pickles, sweet relish, sport peppers, and celery salt. Of course, there will be no ketchup within a mile of this box of awesome.

Now, as I mentioned above, Jay somehow believes that Auburn will go out on the field and score him some that box of goodies. I was rather suprised by this confidence of his, but he was kind enough to talk to me and provide some enlightenment as to why he thinks the wrong kind of feline will be victorious come January 1st... Jay said,

"First off, Auburn players and fans are pumped up to be playing Northwestern in the Outback Bowl. Having played Wisconsin in bowl games twice in the past six years, the Wildcats are a welcome opponent. To Southerners, Northwestern is viewed as the Vanderbilt of the Big Ten - smart students, but not so much on the football field.

However, it's also widely acknowledged that we'll likely all work for a Northwestern grad before our careers are over. In fact, I can check that box. I worked for an NU MBA grad for several years and have to say he was awesome. I'm not sure how well he played football though.

This game is a dangerous one for Auburn. They are expected to win because of tradition and the tough SEC. Tiger fans are finding out that these purple Wildcats are a great football team. They certainly closed the season much better than Auburn. While my Tigers lost to Georgia and collected a "moral victory" over top-ranked Alabama, Northwestern was perhaps the hottest team in the Big 10 coming down the stretch.

Auburn will win a very close game because of running back Ben Tate. While Alabama's Mark Ingram got most of the attention, Tate quietly became one of the most dominant backs in the nation. Quarterback Chris Todd has solid senior leadership and rarely makes mistakes. On defense, Auburn is led by All-SEC defensive end Antonio Coleman. He's a sack master and loves to apply the pressure.

So, I like Auburn to win and deliver to me some of the finest hot dogs in all of Chicago and America. As I take each bite, I'll think of each and everyone of you. See you in Tampa!"

While I think Jay is completely and utterly wrong, I admire his confidence. At this point, you're probably all asking, "Hilary... what do YOU get if the entirely predictable result of a Northwestern victory happens?" (Okay so maybe I was the only one thinking that but uhm... still...) Well, you'll just have to mosey on over to Track 'Em Tigers to find out what I'll be feasting on come the new years....