MSU v TT in the Alamo Bowl: Air Raid basics and how Leach will attack MSU

Share All sharing options for: MSU v TT in the Alamo Bowl: Air Raid basics and how Leach will attack MSU

I'd like to start this post by saying Stride chewing gum is, by far, the longest lasting gum out there. I chew gum constantly and I've been through Orbit, Five, classic Wrigley...and there is just no comparison. I'm happily chewing a piece of Stride right now and I guarantee it makes it to the conclusion of this article. And no, I'm not being paid by Stride (I wish) or auditioning for Mad Men...though I wouldn't mind meeting January Jones.

Mike Leach began his education in and around the pass-giddy BYU program. He's made the "Air Raid" principles successful wherever he's been. So although I claim no special knowledge of the Air Raid (i.e. played against it in high school or...something), I love watching the ease in which yards are picked up and the way Leach tosses out "typical" thoughts about offensive balance or success. 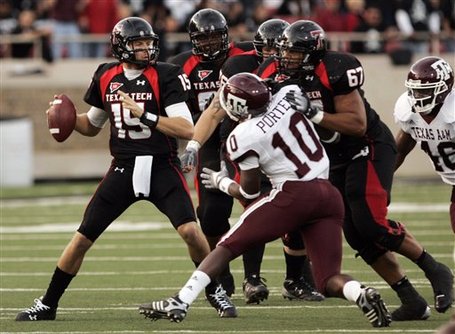 I want to go over the misconceptions and strengths of the Air Raid, what Leach has been able to do this year, and what we can expect Texas Tech to attack MSU with.

One of the things you'll hear about TT's "O" is that it's "complicated" and takes a lot of repetitions. While any great offense takes a great amount of practice to be successful, the playbook for Leach's O will be relatively light against MSU, I'm guessing no more than 15 passing plays. However, these plays will be full of many different options, making the offense seem extremely complicated.

Here's an excerpt from a 2005 WashingtonPost article:

In all, Hodges said, there are no more than 25 primary passing plays, but each can be run using five different formations. The challenge is for the quarterback to know when to switch plays at the line of scrimmage.

Here is a typical progression read by a quarterback from the original BYU concepts:

5 step drop. Take a peek at F/S - if he's up hit Z on post. Otherwise watch X-Y mesh occur - somebody will pop open - let him have ball. Vs. zone - throw to Fullback.

Now I won't put these in order of importance, but the Air Raid demands knowledge of defense, quick read progressions, and great chemistry between WR and QB. Texas Tech has been able to harness these.

The Red Raidaa's (say it like Barbara Streisand combined with John Madden, it's more fun) have kept their offensive torch burning this year, sporting the nation's 2nd best pass offense at 380 ypg while scoring 37 ppg (9th best nationally). They also average 25 first downs per game - the third most in the nation and very symptomatic of a team excelling at short passes.

This success offensively came in spite of losing starting QB Taylor Potts for a few games thanks to a mid-season injury and a general "feeling out" process toward who the starting quarterback will be. This can be easily witnessed in the 142.6 quarterback rating of Texas Tech's quarterbacks - the teams lowest since 2004. Even though quarterbacks and wide receivers are sometimes regarded as interchangeable in the Air Raid, the lack of experience was shown this year during a turnover-laden perfomance by Potts against TAMU and during a 3 point first half versus Baylor. The Red Raiders have also allowed 30 sacks, again symptomatic of passing offenses but by far the most allowed by Leach's O-line during the last 4 years.

The wide receivers are bigger than I would have expected (an image of 5' 7'' waterbug Wes Welker pinballing through secondaries is stuck in my head). The six receivers we'll see the most of against MSU average 6' 1'' 183 lbs - if anything, that's lanky.

What will Leach try against MSU?

The same thing he always tries, of course. Quick passes to wide receivers in space, slants into open grass, dump offs to running backs. On film, Leach will see the same things that have driven TRE and Spartan fans everywhere crazy, namely  MSU's inability to keep their zone intact against crosses, no jamming wide receivers at the LOS, and a lack of pass rush from the front 4. Obviously the numbers don't lie:

I will eventually take a look at the TT defense, but the Air Raid system has always been one of my favorite to watch. It's this kind of "flavor" that makes college football so intriguing, as one Big Ten team will face a triple option attack this Holiday season, while another will face the maestro of wide splits and quick passing.