Insight Bowl: ISU Offense v MN Defense, What does it all mean?

Share All sharing options for: Insight Bowl: ISU Offense v MN Defense, What does it all mean?

Iowa State v Minnesota: two programs on the rise? (I can't lie to you and tell you that I feel like the Gophers are on the rise right now... get back to me in 9 months.)

Cheesehead v Corn-on-the-cob-head: which is the better food related headware? (While I have very strong opinions on this topic, it doesn't have anything to do with Minnesota or football.) 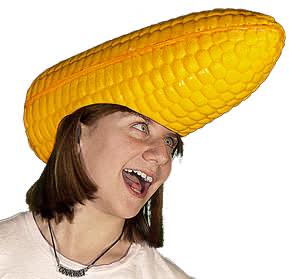 Ultimately, as a Gopher fan, the pending college football bowl season is difficult for me to get excited about because no matter how hard I try I can't get myself real excited for the Insight Bowl.

So, after The Jump I'll break down the offensive v defensive statistical match-ups and try to decipher what it all means.

Statistically the Gophers were one of the worst teams in the Big Ten this season, and shockingly, Iowa State, from a statistical standpoint, appears to be almost as bad.

When ISU is running...

The one thing that ISU appears to do is run the ball, averaging 177.3 yards/game, which ranks 36th nationally.  Their leading rusher is Alexander Robinson who averaged 96 yards/game, and had give 100+ yard games, one of them against a stingy Hawkeye defense in week 2. 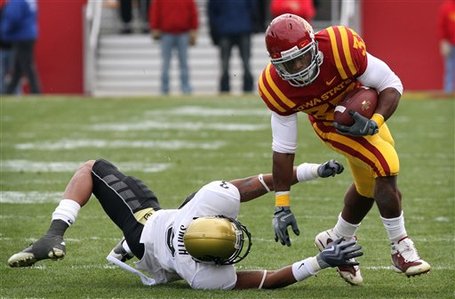 On the flip side, the Gophers give up 146.7 rushing yards/game (64th nationally), so this area of the game could be worth watching.

When ISU is throwing... 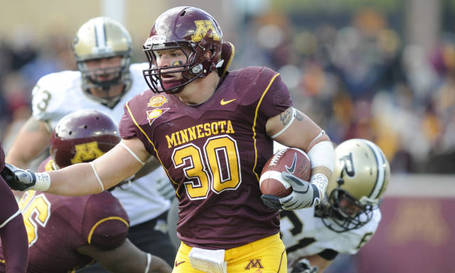 When ISU is in the Red Zone...

What it all means...

While the Gopher defense isn't one that strikes fear in the hearts of many people, they have had a decent season (at least as far as Gopher defenses go), and they rank in the 60's in rushing yards, passing yards, and total offensive yards given up/game.  ISU's offense, on the other hand, is all over the board, ranking 36th in rushing, but 97th in passing.

Bottom line: the Gophers need to stop the Cyclones running game and keep them out of the red zone (sounds like a familiar formula doesn't it?).  When ISU ran for over 200 yards they were 5-1 this season.  The Gophers only gave up 200 yards or more rushing 3 times this season, and they lost 2 of those games (the third was a bit of an anomaly in Air Force, a team that pretty much only runs, and only passed for 125 yards against the Gophers).

The formula for this game is not unlike any other game the Gophers play... stop the run.  If they can slow the Cyclones on the ground the Gopher defense will have a great chance to do what it did a lot of 2009: keep the team in the game and hope and pray that the offense can produce SOMETHING.