Share All sharing options for: The number one reason the Big Ten won't go 1-6 this year

A conference wide improvement in the passing game.

Sure, it looks like the Big Ten has some easier matchups than last year. But last year's one win debacle was not just a product of bad matchups and a mediocre Big Ten, it was also a referendum on the horrendous passing offenses of the teams. If you slowed their run game, we were looking at a dearth of great wide receivers or cohesive passing attacks. If you got in a hole early, the game was over. Let's look at some of last year's matchups, shall we?

2008 Outback Bowl - Wisconsin v. FSU - Florida State began their offensive onslaught in the 3rd quarter, picking up a 21-6 lead and quickly turning that into a 28-6 lead. Wisconsin countered with a power run game but realized the Seminoles were too far ahead to run on two out of every three downs.The result of Wisconsin's 2nd half passing? 82 yards, 2 sacks, 1 Sherer fumble...and one meaningless late touchdown.

2008 Insight Bowl - Minnesota v. Kansas - The Jayhawks had been scoring in bunches all year, which is why I made them a three touchdown favorite in the OPC. Mangino's offense didn't disappoint, scoring 28 first half points to put Minnesota in a hole. How did Adam Weber respond? 19-34, 176 yards and a touchdown.

I've made it widely known that the Big Ten's passing games are improved overall this year. 9 quarterbacks have a 126 rating or higher in 2009, compared to only 4 last year. Tolzien, Cousins, and Kafka are all improvements over their 2008 predecessors. Daryll Clark has continued his statistical wizardry, while Pryor and Stanzi have been trusted to throw more than last year.

While no one will confuse the 2009 Big Ten QB crop with the 2008 Big 12, it's heartening to know that an early deficit won't equal instant defeat because the signalcaller can barely manage a spiral. 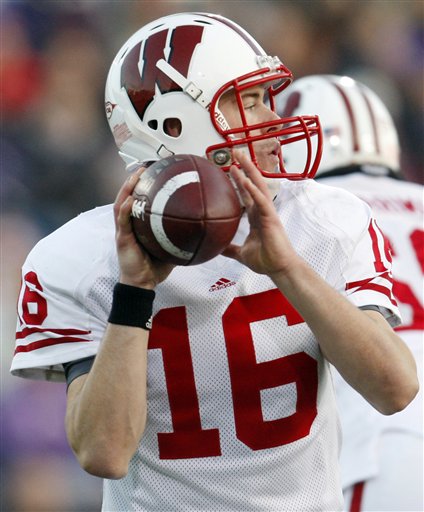 Jim Delaney, I am your only hope.