The Outback Bowl - With Apologies to Gen. Patton

Share All sharing options for: The Outback Bowl - With Apologies to Gen. Patton 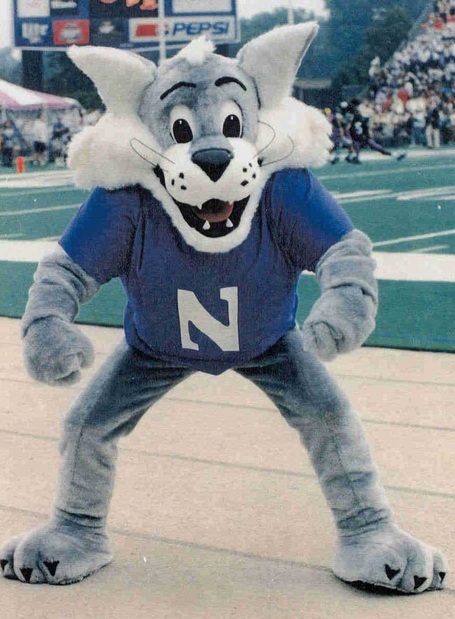 Men, all this stuff you've heard about the Big 10 not wanting to fight, wanting to stay away from the SEC, is a lot of horse dung. The Big 10, traditionally, loves to fight. All real midwesterners love the sting of football.

When you were kids, you all admired our champion quarterbacks, fastest receivers, big league ball carriers, and the toughest linebackers. ESPN loves a winner and will not broadcast a loser. The Big 10 must play to win all the time.

Now, the Wilcats are a team. They live, eat, sleep, and fight as a team. This team speed kills stuff is a bunch of crap. The bilious bastards who wrote that stuff about SEC speed for the blogs don't know anything more about real football than they do about fornicating.

Now, we have the finest receivers and rushers, the best spread scheme, and the best young coaches in the college football world. You know, by God, I actually pity those poor SEC bastards we're going up against. By God, I do. We're not just going to beat the Tigers. We're going to cut out their living guts and use them to grease the cleats of our shoes. We're going to tackle those lousy Tiger bastards by the bushel.

Now, some of you boys, I know, are wondering whether or not you'll chicken-out under pass rush pressure. Don't worry about it. I can assure you that you will all make your blocks. The Tigers are the enemy. Wade into them. Press their receivers. Sack their quarterback. When you put your hand into the turf that is the line of scrimmage a moment before the snap, you'll know what to do.

Now there's another thing I want you to remember. I don't want to get any messages saying that we were flagged for holding. We're not holding anything. Let Auburn do that. We are advancing constantly and we're not interested in holding onto anything -- except the football. We're going to hold onto the ball and we're going to kick Auburn in the ass. We're gonna kick the hell out of the Tigers all the time, and we're gonna go through their line like crap through a goose!

Now, there's one thing that you men will be able to say when you get back home and you may thank God for it. Thirty years from now when you're sitting around your fireside with your grandson on your knee, and he asks you, "What did you do in the great bowl season of 2009?" -- you won't have to say, "Well, I shoveled shit in Detroit."

Switching gears to serious talk, the Outback bowl is one of the enigmas of the Big 10 bowl season. Like the MSU-TT and Iowa-GT contests, Northwestern and Auburn have never played eachother. Not once. As a result, we have no history to go on in evaluating this game beyond the generalized perceptions of Northwestern as a hot Big 10 team down the stretch that is capable of playing to the level of its competition and Auburn as a mushy-middle SEC team that could hang with the best of the FBS, but could also look not much better than Vandy on a good day.

So, since I have no previous matchups to talk about and any other field analysis is just going to be a reptition of stuff you get from other places, I will instead explore the history of the Outback bowl and Northwestern and Auburn's recent bowl histories.

The Outback bowl has not always been such. Like many of the current bowls with absurdist names, the Outback Bowl had a previous history as the Hall of Fame Bowl from 1977 until 1984, and was played first in Alabama and then moved to Tampa in the mid-80s. Since 1996 it has existed in its present state as a bowl game which pits a team from the SEC against a team from the Big 10. Northwestern is one of four teams in the Big 10 that had never played in the Outback Bowl, the other three being Minnesota, Michigan State, and Indiana. Auburn has played in the bowl before - beating Ohio State 31 to 14 in 1990 and losing to Penn State 43 to 14 in 1996.

Northwestern has a less than illustrious bowl resume, with their last win coming in the 1949 Rose Bowl against Cal. They endured a a nearly 50 year drought of bowl appearances after that, when they were for the most part, an absolutely god-awful team. They returned to the bowl scene in 1996 and 1997, losing in the Rose Bowl and Citrus Bowls respectively. The '00s saw losses in the Alamo Bowl against Nebraska in 2000, a loss to Bowling Green in the 2003 Motor City Bowl, to UCLA in the 2005 Sun Bowl, and a narrow OT loss to Missouri in last year's Alamo Bowl.

Auburn is essentially the exact opposite. They have been a perrenial bowl participant in every decade since the 1930s and since 1990 have a winning Bowl record at 9-4. Most recently they've beaten Clemson and Nebraska in the Chik-fil-A and Cotton Bowls, losing to Wisconsin in the Capital One Bowl the year before that.

Historically speaking, then, it would appear that we have a matchup of a perennial post season team against a team that is usually lucky to find themselves enjoying the post season festivities in Texas. Is there any chance for Northwestern? I think there is.

Yes, I have to acknowledge that Northwestern hasn't won a bowl game in nearly as long as the Chicago Cubs haven't won a pennant. But what more can really be said about that? Past records and appearances don't determine current bowl fates anymore than University endowments determine third down conversion rates. Sometimes there is player and coach carry-over, of course, but in that case you can only really look to Northwestern's last bowl - the only one which was coached by Pat Fitzgerald and which has overlap with some of the current players. And that bowl game was nearly a drought ender itself, as the Wildcats forced a superior Missouri team to overtime and nearly stole a victory. Looking at that bowl, then, makes me optimistic.

I am also optimistic because both teams utilize the spread offense. I think that planning defensive strategy against a team that is, in some ways, a mirror image of itself will allow the Northwestern coaching staff to properly prepare... I am also sure that somehow the news of my culinary bet has made its way to the Northwestern team and, as they know that I do not like losing bets, they will earn a victory for me. In the end, nothing more can really be said except, tune in to watch the Wildcats take on the Auburn Tigers at the god awfully early time of 11 AM EST on January 1st, 2010.

Alright now you sons-of-bitches, you know how I feel.