Iowa v. GT in the Orange Bowl: Who stopped the Yellowjacket triple option in 2009?

Share All sharing options for: Iowa v. GT in the Orange Bowl: Who stopped the Yellowjacket triple option in 2009?

Georgia Tech runs for 300+ yards per game while featuring three game-breaking runners and a system that's been run long enough to allow for in-game changes. Can Iowa's staunch defense do anything versus this old-school run attack? 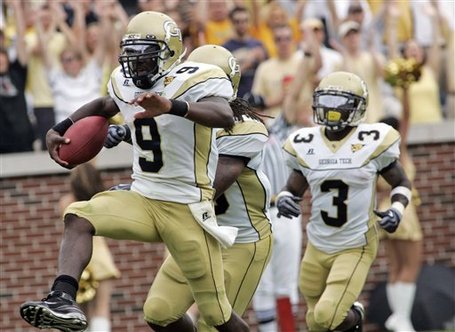 The Yellowjackets offense is predicated on avoiding unmanageable third down situations and keeping the opponent's defense on the field for a long time. Runs of 4-6 yards on first and second down are generally signs that the running game is attacking appropriately. Let's take a look at this year's rushing results.

Only three times did GT not rush for 300 yards - Georgia (205), Miami (95), and Mississippi State (213). A couple other teams had success, so to speak, slowing the triple option. North Carolina gave up only 4.59 yards per rush in a 24-7 loss to GT, while Virginia Tech forced 4 straight GT punts before the run game took its toll and GT scored rushing touchdowns on three of the next four possessions.

Here are Iowa's specs to compare

Let's take a look at the defenses of each team that didn't get overrun totally by the Yellowjackets attack.

The defense was so good that the D-Co was let go by the UGA admin, presumably to open up his chances for an NFL spot (sarcasm, obviously). Despite spending the year giving yards away like Santa giving gifts, the Bulldogs slowed GT easily and came away with a victory. Quote from UGA comment thread regarding GT:

"But their inside running game was completely negated. 2/3 of the triple option (Dwyer and Nesbitt) rushed for a total of 74 yards on 33 carries."

This was a tough as nails defense too, 11th in the country against the run. GT managed 317 yards, but it was a hard-earned 317 yards coming at a 4.59 yards per carry clip. Four Tar Heels made First Team All-ACC defense.

Should I make some kind of conclusion? No? Here are things we do, generate your own predictions and ideas.

Iowa will have the biggest linebackers of these defenses, similar to MSU, and the rather diminutive D-line of Norm Parker's unit probably won't be an issue as a couple other teams have survived with even smaller linemen.

GT is going to run the ball at least 49 times against Iowa, as they have versus everyone save Miami (FL). They will never abandon the run - I distinctly remember Clemson having success stopping the option dive and pitch in the first matchup. After one or two stops, Paul Johnson switched to QB dives on almost every play, and the Yellowjackets drove down the field easily.

Iowa has a brilliant pass defense (9th best in the nation), thanks to mature players who know their roles and the ability of the front four to get pressure with no help from blitzers. These same great attributes won't magically disappear against the option attack.