Size and Speed? Wisconsin Has Its Cake and Eats It Too

Share All sharing options for: Size and Speed? Wisconsin Has Its Cake and Eats It Too 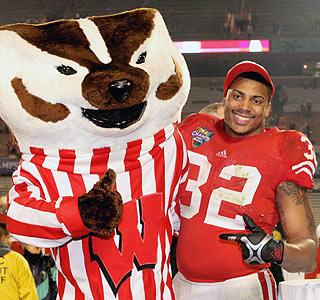 Everyone knows the Big Ten is big.  We're a league dominated by 290 pound corn-fed good old boys, with big guts, and big hearts.

But did you know that the Big Ten is fast too?  Impossible, says the mainstream media, who watched first twenty-three seconds of the Champs Sports Bowl last night, and cried out "We told you so," after Sam Shields sprinted for 86 yards on the opening kickoff, and Graig Cooper walked into the endzone untouched on a 16 yard sweep.

Not so fast.  At least Miami wasn't.  Because for the next 58 minutes, the team with the momentum and the swagger was the one from the Big Ten.  That's right.  The fat, slow, and ever-so predictable Midwest hobbled down to Florida and took Miami to the woodshed.  The signs were there all along.  One commentator remarked that Miami's defensive tackles looked like Wisconsin linebackers.  After triumphantly taking the field in short-sleeved Pro-Combat uniforms, the Canes were noticeably uncomfortable with the 40 degree temperatures.  The team retreated to the locker room to put on their cool weather gear.  Wisconsin grinned and stayed in short-sleeves.

Welcome to the Midwest.

I'm sure the doubters will come up with some sort of an explanation for what happened last night.  How after Miami lost Cooper they were without a star playmaker.  How Harris wasn't 100 percent.

But the level-headed among us won't waiver.  Wisconsin simply man-handled Miami's front seven.  If you've ever seen a grizzly bear devour a salmon, you know why last night's outcome was never in doubt.  The Badger's ran the ball at will, first with John Clay the bruiser, and later with Montee Ball the bludgeoner.  But the biggest surprise of the night had to be Wisconsin's ability to convert on long downs.  Tight ends Lance Kendricks and Garrett Graham fillet and de-boned the Cane secondary time and time again keeping Jacory Harris off the field.

Harris was never completely himself, after taking four shots to his legs and upper torso.  The physicality of a Big Ten line appeared to stun the star quarterback.

A late flurry of offense made the final score closer than it was.  But we know the truth.