5 Sacks: O'Brien Schofield had three sacks and a forced fumble while exhibiting his pass rush skills against an overmatched Miami line. On top of the raw physical talent that makes him one of the nation's premier defensive ends, his motor never stops running. Witness his second sack of the ballgame - chipped outside by a running back, Schofield pivots and quickly turns back inside to, surprise, find the quarterback waiting unprotected. Oh, and if you haven't heard the JJ Watt story, it's pretty wild. Apparently he attended Central Michigan first as a 210 lb. tight end, left for Wisconsin, added 70 pounds along the way...and now makes a living terrorizing Big Ten opponents from his defensive line spot.

Wherein we celebrate the fact that the Big Ten probably won't got 1-6...

Miami's playcalling: I understand that you're a pass-first team, Miami, but I also understand that Wisconsin was getting to your quarterback with unabated ease. Roll Jacory Harris out, run a screen pass, throw a draw play in there, do something other than drop back and watch your OL get obliterated by the speed rushers. The unoriginality of Miami's offense was in stark contrast to the motion-heavy, always play-actioning Wisky O.

National disrespect of Wisconsin: Hilary and I discussed this last night when she mentioned that so few people had picked Wisconsin in our SBN Bowl Pick 'Em. Was it because we watched Wisconsin all year that we knew they featured a tremendously balanced offense and not some top heavy run attack? Or did people just assume Big Ten+slow+Florida opponent = LOSS? 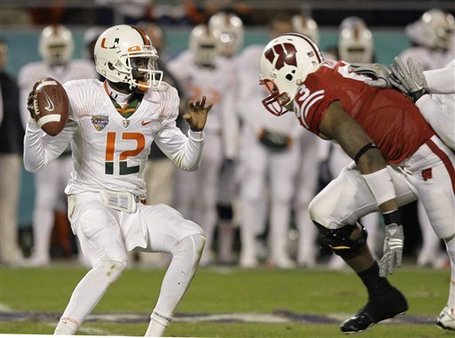 Bret Bielema, coaching master? No one will forget 2008, where Bielema did everything in his power to help Wisconsin blow close games and come unprepared to their Bowl matchup. This year, featuring a young defense, Bielema started a career bench player at quarterback. His defense flourished, never allowing a 100 yard rusher, and Tolzien's accuracy helped the offense hum right along. Last night, Bielema's solid decision making ability showed through on a crucial late-game decision. Up 17-7, the Badgers faced 4th and 1 on the Miami 11 yard line with 4 minutes to go. A touchdown seals the game, but a Miami stop makes it a touchdown/field goal margin. Trusting his defense (and logic, I believe), Bielema called timeout and sent out the dependable Phillip Welch for a chip shot FG. The kick was true, the score was 20-7, and his decision was the correct one. Miami scored quickly and recovered the onside kick - if the score was 17-14, Miami would have thrown higher percentage passes, only needing 30 yards to move into FG range. Instead Harris forced the ball into deep coverage, knowing the Canes had to drive 65 yards for a touchdown. Bret (in a major change from last year's D- coaching grade), we at TRE salute your decision making ability!

50 pounds: Wisconsin's always massive line outweighed the Canes DL's by 50 pounds on average. It showed too - the Badgers linemen created a nice wall for Tolzien to sit behind and pick apart the Miami pass defense. How heavenly it was to watch a big red shirt swallow up a smaller defensive end and toss him to the side!

Tip drill, tip drill! The Wisky receivers and tight ends made excellent catches all night. Though Kendricks (128 yards) will get his name in all the stories, John Clay had a diving catch and Garrett Graham shredded the middle of the field nicely.