Texas Tech v MSU in the Alamo Bowl: Do past bowl results tell us anything about this game?

Share All sharing options for: Texas Tech v MSU in the Alamo Bowl: Do past bowl results tell us anything about this game?

I am hardly excited about this match-up, as everyone can explain what exactly Michigan State needs to do for a chance at winning, but no one can explain how exactly this is going to happen. Everyone and their mother knows Michigan State can't defend the pass and that defensive coordinator Pat Narduzzi refuses to play anything other than two ineffective schemes. Everyone also knows that the magic of the Texas Tech attack comes from the Air Raid principles of Mike Leach, which includes an amalgamation of shallow crossing routes, comeback routes, dumpoffs in space, and quick screens.

Here is the numbers breakdown from The Only Colors, of course highlighting the fact that TT has the #2 passing offense in the nation and MSU has the #103 pass defense.

But let's save the scheming and gnashing of Spartan teeth for another day and discuss some past bowl games results. Could this game be closer than everyone believes?

How do the Spartans look in bowl games and what does this say about the 2010 Alamo Bowl? MSU is currently on a 3 game bowl losing streak: '03 to Nebraska, '07 to BC and '08 to Georgia. The Georgia game was a decent indicator - MSU played tough against the run and kept the game close until it became apparent that Brian Hoyer wasn't going to be able lead the Spartans to victory through the air with Ringer bottled up. MSU even led at the half, 6-3. So essentially, they were who everyone thought they were, a solid defense with not enough offense.

How do the Red Raiders look in bowl games and what does this say about the 2010 Alamo Bowl? A 10-21-1 bowl record doesn't diminish the fact that Texas Tech has been bowling consistently for two decades, competing in 16 bowl games in the last 25 years. However, the last three years give excellent indication of what happens come Holiday time to Leach's Raiders.

No shortage of points, but not exactly stingy defense either. Don't forget that the 2008 version featured Graham Harrell and Mike Crabtree, but Ole Miss put a lickin' on 'em anyways.

Now I understand perfectly that football games exist in a vacuum and that some TT defensive back isn't going to be thinking about an '06 performance while on the field. This is a brand new matchup with new players at key positions (no Otis Wiley, Crabtree, Ringer, Harrell). But I've decided that, in the spirit of the holidays, each Alamo Bowl post will have some form of optimistic Spartan bent to it. It's not propaganda, more like inspiration for all those Sparties depressed about the 10 suspended players, no running back depth, and a matchup from hell with Leach's minions.

So let me say this: Texas Tech's offensive makes them seem like an unattractive bowl match-up, including last year when only 1 out of 12 OPC contestants picked Ole Miss over TT. This is perfectly understandable, especially when one sees the Air Raid scenario's and plays like the one below. How is my team going to prepare for this in one month, you ask, and do we really have the horses to stop a team scoring almost 40 points a game? Well for the last three years, medium-level programs from the ACC, SEC, and Big Ten have held their own against Texas Tech. So don't lose all hope yet Spartans. 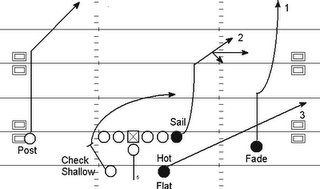