Share All sharing options for: Fallin' Off The Big 10 CFB Radar: Wisconsin/Purdue Edition

My question to FSUncensored, the brain behind Tomahawk Nation: "You were the #1 program of the 1990's and now you're mired in a slight 8 year slump, trying to become dominant but sort of stuck at the proverbial 8-5, 9-4 season. What's that feel like?" FSUncensored: "Remember that time in your life when numerous hot girls wanted to go out with you? Remember 5 years later when your cupboard was somewhat bare, female wise? Yeah...like that."

So in the spirit of bringing big-time Midwest football to your e-doorstep, I brought in some outside Big 10 bloggers to give me a feel for what it's like to no longer hold the title of overdog. You may be familiar with Off The Tracks, an excellent Purdue blogger who will be moving onto SBN, but you may not know the impressive work that Badger blogger On Wisconsin does while specializing in everything Wisconsin football.

When did you realize that your respective teams were not only overrated this year, but probably overwhelmed too?

Off the Tracks: It was probably during the Notre Dame game. Against Oregon we blew a big lead, but they are a good team. I expected to struggle against Central Michigan because they were a very good team, had played us twice the previous season, and they were definitely looking for a "name" win. We fit that bill for them. Against Notre Dame I knew we were in trouble because we couldn't stop their running game when San Diego State gave them fits. As soon as the second half got away from us when it shouldn't have, I knew we were doomed.

On Wisconsin: Squeaking by Fresno State told me we weren't top 10. Getting waxed by Penn State knocked us out of the top 25 in my mind. I could forgive the bad loss to Michigan (we didn't yet know just how bad they were), especially with the solid effort against a good Ohio State. Would've liked it to go a different way, but it was forgivable. Losing to Penn State wouldn't have even been the end of the world, but getting embarrassed at home? No way the Badgers were still top 25 material.

To generalize, Purdue throws quick effective passes, Wisconsin runs power sweeps. After the unsuccessful 2008 campaigns, will there be changes in the offensive philosophies of each team?

Off the Tracks: This coming season I think we are going to run more. We have a mobile quarterback in Justin Siller, a returning starter that was hurt last year in Jaycen Taylor at running back, and a 4-star recruit coming in as well. We have to utilize these guys more if they are producing. I am not one to pass for the sake of passing. If the running game is working, then use it until they stop you. This was what we ran into against Oregon. We ran all day on them but struggled when we forced ourselves to pass.

On Wisconsin: I think there's a misconception out there about what Wisconsin does on offense. Since Barry brought in Paul Chryst (2005), our offense has looked a lot different. We go with one (yes, pretty big) back more often than not, three wideouts, and throw to our tight ends a ton. It's a pro-style offense that actually looks a lot like what Notre Dame runs under Charlie Weis. It doesn't look much like the 90s style Alvarez offenses. The reason it's been so run focused in the last two years is we haven't had the quarterback to run the system the way Chryst wants. If you look at 2005 and 2006, with John Stocco under center, we had a very balanced attack that could bite you any of a number of ways. 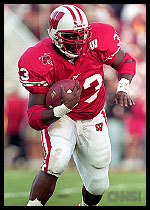 Will Big Tailback U change its ways?

The last two years we lined up in the same sets and tried a lot of the same plays, but Donovan, Evridge and Sherer (at least last season) couldn't handle it. Chryst doesn't want to just pound the rock, but the last two seasons the personnel he was working with dictated his options. I guarantee he wants to see Sherer develop enough to run things right, or Phillips step in to handle the job under center. If either of them is capable, you will see a balanced attack with high percentage passes including drag routes over the middle and underneath screens, off-balance runs, and a lot of points.

In one corner, a coaching transition...In the other, some unhappiness on the coaching front. OTT, will the transition from Tiller be successful? OW, what''s your confidence level in Bielema on a scale of 1-10?

Off the Tracks: The key to the transition is getting the defense to perform more consistently with the offense. Last year we had good defensive games against Michigan State, Ohio State, and Minnesota, but the offense couldn't score in a women's prison with a fistful of pardons. Then you have games against Notre Dame and Michigan where the offense was fine, but the defense couldn't stop anybody against very poor offenses. I think much of the offenses struggles came from injuries among the offensive line and on defense we had a very thin, young, linbacking corps. Sadly, I don't expect great improvement in either place this year.

On Wisconsin: T his depends a lot on what kind of fan you are. There's no doubt the trend has been negative since year one. I'm patient. He's a new head coach and a young guy. I'm ok with some mistakes here or there (not great with it, but I can live with it). That's me, though. A lot of fans have had enough. He comes across as pretty arrogant which is fine when you're winning. Last season it wasn't fine. But a few wins early in 2009 and he will repair his reputation a little.

Overall, I'd say my confidence in him is somewhere around a 6. The potential is there, but right now he's not realizing it. 5 or lower means he needs to go. I don't think we're at that point just yet. He needs to make better down and distance decisions, and his team needs to be able to put opponents away. We've surrendered far too many second-half comebacks or near comebacks during his tenure. The defense hasn't held up in the second half, and the offense hasn't had the killer instinct to put teams away. Both need to change.

People forget that King Barry had down years, too. My senior year, 1995, was awful. 2000 through 2003 weren't so hot, either. Barry set the bar high in '93 and even higher in '98 and '99. '04 and '05 capped a hall of fame career for a coach at Wisconsin, but it wasn't always peaches and cream. So, for me, Bielema doesn't need to win the Rose Bowl next season, he just needs to field a tough team. He has the pieces to do it, but he needs to execute.