Big 10 Players in the Super Bowl: The MVP and X-Factor's

Share All sharing options for: Big 10 Players in the Super Bowl: The MVP and X-Factor's 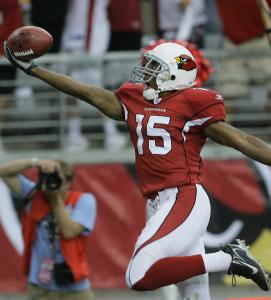 Steve Breaston, Michigan (WR): His speed and soft hands should remind you of Derrick Williams, but no one could have predicted Breaston's ability to fit perfectly in the Zona offense. He had 6 catches for 71 yards and absorbed some huge hits from the Steeler defense. Didn't drop a pass and showed his effectiveness in the kick return game also.

Chike Okeafor, Purdue (DE): Started the game at DE, 2nd on the Cards in tackles with 6. Helped limit Fast Willie Parker and the Pitt run game to 53 yards. Also gave a shout out to West Lafayette in the starter introductions.

Neil Rackers, Illinois (K): Usually people pick kickers as "x factors" if they believe a close game is brewing. Since Pitt was the consensus favorite, Rackers didn't get that much attention. Made all 3 extra point attempts.

Gabe Watson, Michigan (DT): Made one tackle. Of course it's hard to accumulate stats in a defensive system that plays one DT at a time...And that DT happens to be All Pro Darnell Dockett.

Tyrone Carter, Minnesota (DB): 2 tackles, no picks. Did have an interception in the AFC Championship though. Should be congratulated for getting playing time at all in the star-studded Steeler secondary.

Carey Davis, Illinois (RB): Made a 6 yard catch and had a tackle on special teams. Wouldn't be on the field if not for the Mendenthall injury.

Larry Foote, Michigan (LB): This straight talker (or if you prefer, loose cannon) had 2 tackles and along with Harrison and Farrior, gives the Steelers the absolute best linebacking corp in pro football. 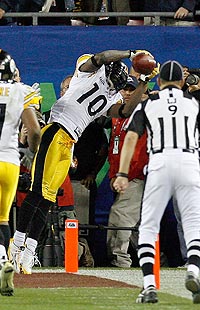 Santonio Holmes, Ohio State (WR): MVP! MVP! From drug dealer to Super Bowl star, it couldn't have gone any better for this former Buckeye. His separation ability and quickness helped him grab 9 catches for 131 yards and the game winning touchdown. We will be seeing that tip toe catch for a longggg time on highlight reels.

Sean McHugh, Penn State (TE): No stats, did endure about 5000 puff pieces about being cut from the Lions to being picked up by the AFC champ Steelers.

Lamar Woodley, Michigan (DE): Extremely disruptive force from the outside, registering 2 sacks, 3 tackles, 1 pass knocked down. I mean, you know he's fast fast and athletic, but he spent the entire game running around the Arizona offensive linemen. Another brilliant draft choice by Pitt and a perfect fit for the #1 rated defense in the NFL.