What's the difference between a casual fan and a perceived "authority"?  It's the later's time-tested ability to conjure up the names of obscure players, and sprinkle them into football analysis like Frank Costanza trying to season rotten beef.  Let's look at a conversation that's happening at a BW3's somewhere as we speak:

Mark (Prefers American Idol to college football, but wants to fit in): "The Gators sure had a good day yesterday.  Think they'll play for another national championship?"

Lee (Like most August to January fans, gets the big picture and not much else): "Oh yeah, with the way Tebow ended the season -- that kid's got a will to win.  I say, he collects another Heisman."

Kirk (Didn't get any work done yesterday because he spent the entire afternoon glued to Rivals.com): "I'll tell you what, I was worried when Percy left early -- but Andre Debose looks just as fast, and he's got a great ability to get up field." 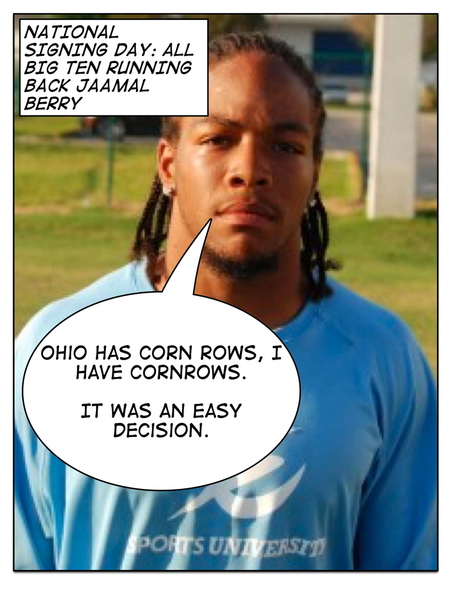 Let's face it, you want to be Kirk. In our continuing attempt to make you resident sage of the offseason, we've created an All Big Ten team using the new signees.  Here are the soon to be household names in conference.