Despite our hibernating tundra of a landscape, it's been a fruitful week for the sport, as we plant the seeds for the future.  To that end, here's a beer-goggled wrap up.

Do the Buckeyes have the top class in the country?  They do according to Scout.com and their pinball-like point metrics.  And it's true, the Bucks went out early, dropped their nets, and got back on solid ground in time for happy hour $1 drafts and half-priced appetizers: 25 commits, 7 top 150, 3 five star, 14 four star, and 8 three star athletes make for a serious bouillabaisse.

But before we get too cozy with our embryonic chickens, let's remember the words of ESPN's Tom Luginbill, who noted that "while Ohio State's recruiting class this year was impressive on paper, unlike LSU and Georgia's classes, Ohio State's is going to have prove it on the field at the next level."

The bottom line.  Talent is only as strong as its development, and we've still got a lot of innovating to do on the offensive side of the ball.

Anyway I like Michigan's class better.  Oh come now -- I can look, can't I?  It's what Sun-Tzu had in mind when he offered the age-old addage, "keep your friends close, and your enemies closer."  As I mentioned to The Silver Bullet, there's something to be said for classes that can immediately impact a team's vitality.  There are few classes in the country that will play as big of a role for their program from day one as these Junior Weasels.

We can start with Tate Forcier -- who rushed for 733 yards and six touchdowns, while piling up 2,387 yards and 21 TDs in the air as a Junior in Diego, CA.  Forcier, who surrenders significantly less often than his French-derived name would otherwise indicate, has the legs of Tim Tebow, and the arm of Mark Sanchez.  His Achilles heel just might be his weight.  At 183 pounds he's currently fifty pounds smaller than Timmy T.

So, they got him a line -- a four star line, in Taylor Lewan, Michael Schofield, and Quinton Washington.  All-purpose talent Je'Ron Stokes puts the cherry on the sundae.

Too bad we're still going to wear em' out and run em' over in Ann Arbor.  RR's team is still a year away from the return.

Who the hell is this guy?  Is Lane Kiffin the head coach of a major BCS program or a spoiled, bed-wetting eleven year old?  Whoever he is, he might want to stop taking the top bunk above sleeping giants. 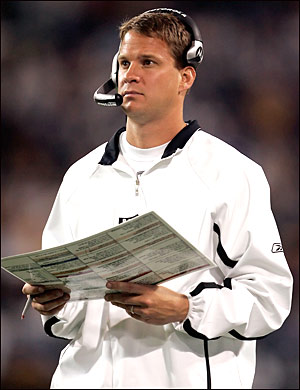 Lane reminds me of that hot-sh*t freshman member of the College Republicans who raises his hand during a lecture with a visiting Nobel Prize winning Economist and proceeds to try and discredit Keynesian theory before being completely blown out of the water.

Here are a few numbers Kiffin should keep in mind:

Kiffin's blatant disrespect for his elders is nothing short of hubris.  Sure, there's something to be said for a hard-nosed advocate "energizing" his base, but Kiffin has gone way beyond mere ribbing.  He's inventing facts, botching rules, and slandering collegues in the process.  Now he's got enemies, who'd love nothing more than to see him fall flat on his face.

Don't buy it?  Suppose Tennessee struggles in Lane's first season.  They're 1-1, and overmatched heading to play Florida in Gainesville. Urban Meyer goes up 28-3 in the second quarter.  Does he take his foot off the gas?  (If your answer is yes, you must have missed the cold-dunk he gave Georgia last season for its 2007 dancing in the endzone antics.)  Urban shows no mercy, drowns the Vols by an epic margin, 56-10, and -- surprise -- suddenly Kiffin's on the hot seat.  Four games later, he goes on the road to face Alabama.  The following week: he'll see South Carolina.

Coaching, like politics, depends on tact, discretion, and comradery.

It's time for Lane to grow up.