Eric Decker in the 2009 Offseason: Breakout

Share All sharing options for: Eric Decker in the 2009 Offseason: Breakout

As it turns out Minnesota isn't exactly a mecca for wide receivers.  Just like it'd be crazy to crank the windows down on Highway 55 in Minneapolis in January, the Golden Gophers coaching staff has historically kept the playbook inside the slot -- recruiting and developing star running backs and tight ends.

That's why it's appropriate to tackle wide receiver Eric Decker; the 2008 Big Ten leader in catches (84) and yards (1,074), who co-authored Tim Brewster's offensive "pitch and catch" revolution off the merciless arm of Adam Weber. 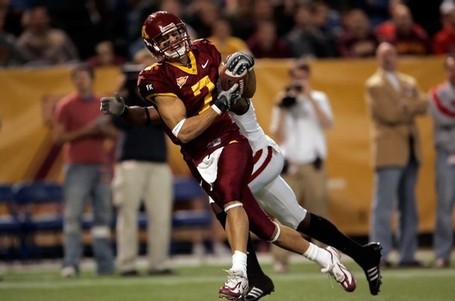 In 2008, the junior receiver avenged a nauseating 1-11 campaign by emerging as a credible tension threat.  After pulling down 10 catches in the season opener, he went on to grip 84 throws for an average of 12.79 yards a carry and 7 touchdowns.  Increased reliance on the throw paid dividends -- it covered for a miniature rushing offense, and allowed the Gophers to gnaw their way to a 7-1 start -- before an ankle injury stunted the go-to's growth.  Minnesota lost its last five games -- including the Insight Bowl -- leaving a bad aftertaste in the mouth of the burgeoning star.  Which brings us to that all familiar question...

What is Eric Decker doing this offseason to improve?

In naming Decker one of its 120 Players to Know, Scouts.com describes an All-American candidate, who's "expected to be an even bigger part of the new Gopher offense under Jedd Fisch."  Scouts predicts "less spread and more pro-style passing meaning Decker’s numbers and profile could go from great to truly special."

Still, the most important thing to know about Eric Decker this offseason is that he's not exactly off this season. Decker is a veteren baseball player -- who swings as well as he catches (.329, 28 RBIs in 2008).  As he makes the jog out to left field, Decker can't lose sight of his football fundamentals -- namely his speed.

This brute isn't burning anyone in deep coverage -- but increased attention to early explosivenes will free up a number of quick slants, and short throws to outsmart the blitz.  To the extent Decker is limited by his size and physical stature, he should learn to run NFL-style stutter-routes, and call-backs; choosing to battle secondaries on his own terms.