Share All sharing options for: Brandon Graham in the 2009 Offseason: Natural Born Killer

As Maize and Brew describes, Graham...

"does not do push-ups...he pushes the earth down."

"once drank a gallon of chocolate milk after a workout, in one swallow."

"creates enough energy [in one workout] to power Cincinnati for a week." 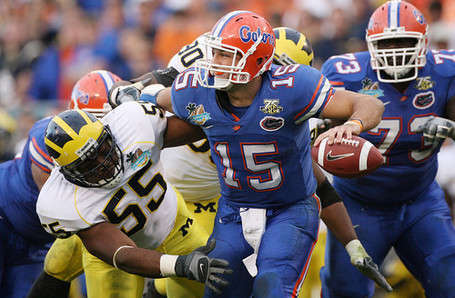 The 6-2, 270 pound Senior is repped for another go-round, after an anti-climatic 2008 left him bruised, and brazen.  Though stepping up to brace 46 tackles (29 solo), this big diesel ran out of gas midway through the season.  After knocking opponents back with 53 yards worth of tackles for losses in the first four games, Graham managed just 44 yards of wrap ups short of scrimmage the remainder for the season.  Similarly, after landing 5 sacks in his first four games, he struggled to steamroll -- lending opposing offenses valuable time in the pocket.

Maize and Brew is all over it: Graham's success came when he was able to use his speed over a short-field to skip past opposing tackles.  When faced with larger matchups, he was often tangled and buried.

Which begs the question...

What is Brandon Graham doing this offseason to improve?

It's important not to forget, as the Detriot Free Press signals, the administrative effect new Defense Coordinator Greg Robinson will have on Graham's game identity.

As they reason, a shift to a nickel approach with multiple DB's, "shows confidence in U-M's premier defensive linemen, Brandon Graham and Mike Martin."  But they've got to be able to handle the added weight.

Expect Graham to bulk up a bit -- to better balance his speed and power.  Additionally, look for Graham to jump the rush more -- as Robinson counts on six defensive backs to cover the pick up.  Still, don't just count on him to put the quarterback's head on the chopping block.  Graham needs to work on his ability to contain to close the gap on Big Ten power running offenses.

If Graham can make improvements in both areas, he'll be a formidible force in 2009.