Spartans OLB Greg Jones in the 2009 Offseason: Follow The Leader

I've always thought that next to quarterback, the coolest position in football was linebacker. Reasons:

Greg Jones, the Spartans stud outside linebacker, did not turn heads in 2008 by mangling and destroying ballcarriers, ala Lavar Arrington in Happy Valley. But he did earn First Team All-Big 10 honors by leading the Big 10 in individual tackles. Weighing 220 lbs and standing 6 feet tall, this Moeller (OH) standout played the outside linebacker position perfectly. He made a habit of catching running backs behind the line of scrimmage and was the unquestioned leader of a better-than-expected Spartan defense. 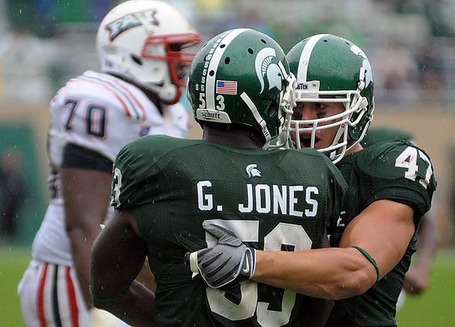 Three main points about this tackling machine: 1) He has perfect form when he breaks down to tackle. I'm talking: head up, chest out, arms wrapped around target. For a medium to small Big 10 linebacker who faces some of the NCAA's best running games, the need for good tackling form is paramount. 2) He lived in the backfield for much of the season, finishing with 12.5 tackles for loss which was second among all Big 10 linebackers. This statistic shows an obvious ability to shoot gaps and/or take on blockers successfully. 3) Jones was only a sophomore, meaning his veteran leadership will be invaluable as MSU attempts to become a Big 10 power.

What is Greg Jones doing this offseason to improve?

Many times, smaller linebackers are asked to put on weight during the offseason as part of their training regimen. Not only does it make you more attractive to the NFL, but players naturally lose weight during the regular season, so it can help with durability. Jones should resist this temptation. He plays fast and smart at 220, rarely struggling to scrape off blocks from offensive linemen.

Mr. Jones should, however, ask Coach Mark Dantonio for more defensive packages. The Spartan defense gave up 132 points last year to Cal, Ohio State, and Penn State. Coach Dantonio's stock 4-3 defense, which was neither blitz heavy or especially complicated, often proved ineffective against top athletes and offensive minds. This offseason, Dantonio would do well to install some different formations and packages into his defense. He has a proven veteran leader in Jones, which will make the added schemes easier to integrate.