Garrett Graham in the 2009 Offseason: Bring It Back

Share All sharing options for: Garrett Graham in the 2009 Offseason: Bring It Back

One could easily see the irony in Wisconsin's tight end situation last year. A team known for it's tremendous rushing offense just happened to be blessed with the Big 10's best pass catching tight end, Travis Beckum, a probable third round pick in this year's NFL Draft. After Beckum suffered injury during the season, he was replaced by Garrett Graham, who led the Badgers in receptions, yards, and touchdowns. But did anyone notice Graham's brilliance in the midst of the most disappointing Badger season in years? 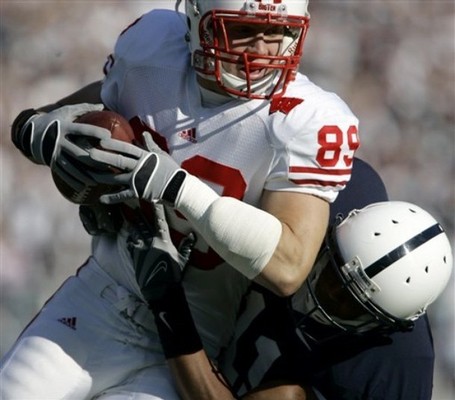 The answer is most definitely yes. Graham garnered First Team All-Big 10 honors and has been singled out by the Wisconsin coaches to be a leader, in the lockerrom and on the field. Badger fans love him for a number of reasons:

We wrote this blurb about the Red and White's shockingly bad season last year: "Bret Bielema will survive to coach next year, albeit with a low rated recruiting class and a complimentary hot seat from the Madison admin. For the Big 10, this was a black eye. The 3rd best Big 10 football program from the past 10 years looked slow and predictable." With players like Jay Valai, Graham and John Clay returning, we know that talent exists in Madison to turn this program back into the perennial power of the Barry Alvarez years. So -

What is Garrett Graham doing this offseason to improve?

Whatever happens this offseason, he's going to have more strength than last year, when surgery rendered him useless for 2008 Spring Practices. This year, the Badger coaches are pushing Graham to be the best tight end in the nation, focusing on crisper route running and pushing him to take over a leadership role. This quote from the coaches sums up the Madison approach to offseason progess:

Big talk from a program knowing the full potential of it's star tight end. Let's hope Graham can continue to shine in the Madison spotlight.