Kellen Lewis in the 2009 Offseason: Make Do With What You Got

Share All sharing options for: Kellen Lewis in the 2009 Offseason: Make Do With What You Got

Whether you focus on his meteoric rise, or premature fall, Indiana's dual-threat Kellen Lewis is the lone bright star on a Crimson roster that is clandestine, at best, and mediocre, at worst.  The player that challenged the Big Ten's size-over-speed, simple-over-spectacular personality in 2007 -- melting school rushing and passing records along the way (28 passing touchdowns, 9 rushing touchdowns) -- carried the Hoosiers to a 7-6 season, and their first bowl game in fourteen years.

Then he lost focus.  After serving a four-month suspension in the offseason for an unspecified violation of team rules, Kellen returned the helm as signal caller only to struggle with injuries in 2008.  Starting just nine games, his pass pace was disrupted by the loss of top target James Hardy.  In the end, the Hoosiers finished ninth in conference in passing offense, and tenth in conference in scoring offense, crawling into the offseason with an abysmal 3-9 record. 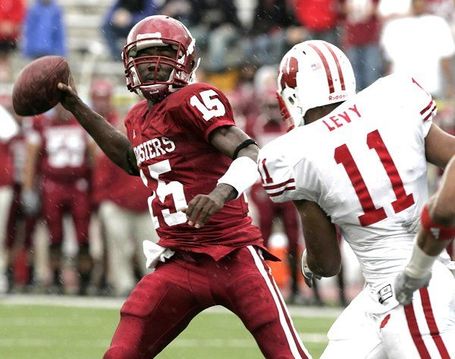 Just look at this statistical comparison, courtesy of the Bleacher Report:

When the dust settles, will Kellen's legacy be one of an electric playmaker, or eccentric troublemaker?  2009 is his last chance to prove himself.  So...

What is Kellen Lewis doing this offseason to improve?

First, it's important to recognize -- as the Bleacher Report so aptly puts it -- that "[t]he Hoosiers are in a total state of flux."

Quarterback Ben Chappell, who played in eleven games in 2008, and started for the Hoosiers on three occassions when Kellen was out, showed promise of consistency, gunning for 1,001 yards, and leading IU to its best victory of the season over 22nd ranked Northwestern.  Chappell won't just be competing to start behind center: he's the man to beat.

Further, Coach Bill Lynch is upsetting the position fruit basket, mixing and matching his talent in hopes of producing a more balanced team.  To this end, top wideout Ray Fisher might be moving to cornerback.

What's all this mean for Lewis? Well, he's listed as a wide receiver on the spring practice roster.  The Bleacher Report doesn't sugar coat it, "Lewis is going to play 'all over the place.'"

So, how in the world does a guy prepare?

By staying positive, even in the face of change.  Rather than be distracted by an underclassmen taking snaps at his position, Lewis must focus on the task at hand.  If that means re-casting his abilities to be the go to guy outside the slot, and the best hands on the team, so be it.

Without a willingness to do whatever is necessary to help his guys, Lewis will fail.  With the right attitude, he has the potential to be a selfless beacon of leadership on an otherwise troubled squad.