Oh boy. The Big 10's 5th best team of the last 10 years has fallen on talentless hard times, a common occurrence for a transitional program. Legendary coach Joe Tiller departs and is replaced by Danny Hope, who hopes to improve on a 2008 season laden with injuries, blowout losses, and late game meltdowns. Hope inherits a couple lackluster recruiting classes and a spread passing offense that has "gone stale," according to new SBN blogger We Will Always Have Tempe. Most of the defense returns (7/11) and many of the offensive starters will still be playing in West Lafayette (5/11), excluding the well known playmakers (Curtis Painter, Korey Sheets, Greg Orton) who all graduated. 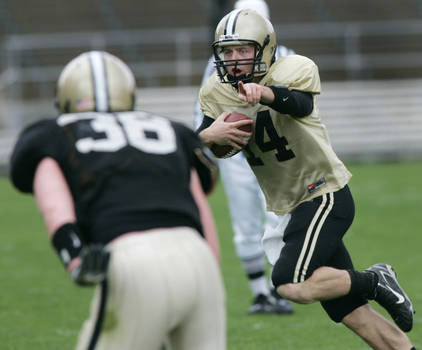 Will Joey Elliot lead Purdue in 2009?

Purdue's offense used to be a bastion of precise three yard outs and deceptive draw plays. Last year's struggles exhibited an obvious problem with the Tiller O as we know it: If the passing game isn't dynamic and effective, the opposing defenses will simply load up on the run and allow the passing game to fizzle on its own. In the 6 Big 10 losses from last year, the Purdue offense averaged a meager 11 ppg. Even a veteran quarterback like Curtis Painter, once a projected 1st round NFL pick according to Mel Kiper, could not prod the Boilermakers into the endzone.

This year, questions will begin at the quarterback position, where Boiled Sports puts the number of contestants for starter at 5. Joey Elliot (pocket presence, the cliched "game management" ability) and Justin Siller (elusiveness, gamebreaking ability) bring their skill sets and game experience to Spring Practice, but at least three others will compete for the starting job. The winner of this competition will highlight whether Hope has decided to stay true to the pocket passing of Tiller's basketball on grass system or introduce new offensive wrinkles.

The lack of a playmaker at wide receiver will also be a main focus in West Lafayette. With Orton departed and a couple of converted defensive backs playing receiver, Hope will not have targets on the edge, a deficiency sure to impact the evolution of this offense.

Stop Picking On Me

A common refrain from the overmatched Purdue linebacking corps of 2008, this new year brings veterans and new faces alike. Spring Practice will be the laboratory where this formerly injured and undersized group shows its potential to be...healthy and bigger. Joe Holland and Chris Carlino, both under 215 lbs, will lead the unit, but it remains to be seem whether someone develops into a legitimate first team All Big 10 talent. 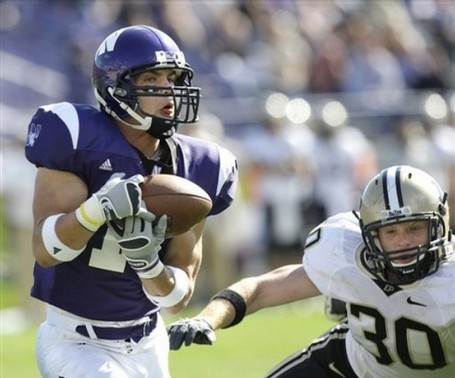 Linebacker Joe Holland gets down in the paint...

The 2009 edition of the Purdue Boilermakers football team will be under tremendous scrutiny. Will Hope alter the well known pass happy system that churned out so many winning years with Drew Brees and Kyle Orton? Will the linebacking corps take last year's season long whipping as inspiration to improve?

Finally, will running back Jaycen Taylor become a credible threat between the tackles?

The Boilermakers will likely be a flat 2-2 when Pat Fitzgerald and the Wildcats come to town.  Purdue needs a confidence win in conference to punctuate a three game home stretch and avoid a 2-5 start.

Is Purdue a basketball or football school? Does it matter? What is the fan mentality for a program that played in a Rose Bowl not so long ago and now sits at the bottom of our 2009 Big 10 predictions?