It's been noted that Northwestern has been robbed of its 2008 laureates, leaving a roster that reads more like a state-school wait list.  But, despite saying see ya to C.J. (Bacher) and his steady, if not spectacular production (2442 yards, 60 percent completion), the Wildcats have the benefit of a seasoned signal caller in Mike Kafka who saw significant playing time in eight games last season, delivering a scramble-driven 321 rushing yards, and 330 yards through the air. 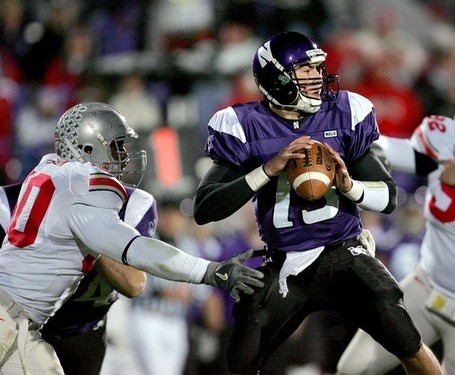 Kafka's metamorphosis: Let's get one thing straight: Kafka is a human pinball -- smooth, daring, and prone to ricochet.  In 2008 he was often employed on draw plays, taking the snap directly at opposing ends -- and using his lateral speed to ride a wave of blocks, bouncing off and spinning around tacklers, and stretching out on the fall.

In 2008, Kafka ran 68 times, carrying the ball across the sticks for a first down on 18 different occasions and, pulling off 13 ten plus yard gains, and 5 20 plus yard hauls.

Make no mistake, Fitzgerald will continue to use Kafka's legs on first down looks against man coverage, and short third down sequences.  But...

What is Mike Kafka doing this offseason to improve?

To develop from a foot-racer to a dual-threat, Kafka will use the offseason to booster his aerial awareness, buffing up on coverage smarts in the film room.

Although Kafka completed a solid 69.6 percent of his pass attempts in 2008, that rating dropped dramatically (to 42.9 percent) when driving the gauntlet between an opponent's 39 and 21 yard lines.  Of 46 attempts, he completed 17 passes for over 15 yards -- but just two soared for over 25.  To take advantage of mismatches in opposing coverages, look for Kafka to improve his arm strength and rhythm.

Because he stands to take over every series, look for Kafka to mature into a pass first, run second mentality, sustaining quick slants in Northwestern's swift strike spread attack.

To pick up blitzes, and hit short-yardage routes, Kafka will need to tighten his timing, loosen up his arm and relax his reads -- preventing misfires.  If he pulls it off, he'll quickly become one of the most versitile quarterbacks in the conference.

But, vanity comes at a price.  Expect to see a 2009 Mike Kafka who is a little more skiddish towards contact, and takes to the turf feet forward more often.