Two years ago the dawn was bright in Bloomington.  Hoosier football, the perennial black-sheep in a state with an otherwise proud athletic tradition, was entering its third season under the command of Terry Hoeppner.  Although Coach Hep's success had been marginal in his first two seasons at the helm (4-8 in 2005, and 5-7 in 2007), his influence over the program and its urgent new attitude was resounding.

As one of his first orders of business Hoeppner demanded that a giant boulder be trucked in and dumped outside Memorial Stadium.  On it, he inscribed the spiritual mantra of the new Hoosiers: "Defend The Rock."  The rock, with its stoic density, gave a sense of identity to a facility that had never been home to a champion.

The summer before his junior campaign Hoeppner saw the return of a brain tumor that would eventually cost him his life.  As his conditions worsened, he charged his players with a final challenge: "Play 13."

Practically speaking, "Play 13" was a reference to earning a bowl bid -- something Indiana hadn't done since 1993.  Emotionally, the expression stood for much more.  It was a call to achieve -- a cry to rally against the odds.

In 2007, the Hoosiers did just that.  Led by a young Kellen Lewis the crimson battled to a 7-5 regular season and a bid to the Insight Bowl in Tempe, Arizona.

The squad entered 2008 with solid momentum, and lofty ambitions. 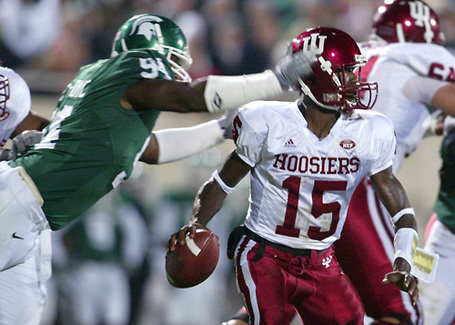 Where will Kellen Lewis show up in 2009?

The Hoosiers finished a damning 3-9, earning themselves a stay in blustery Bloomington for the holidays.

The way we see it there are three things that coach Bill Lynch needs to address this spring: energy, passing potency, and secondary.

The first may be intangible -- but it's nothing short of indispensable.  The Hoosiers, frankly, have got to want to win.  I'm not just talking about an increased emphasis on fundamentals, but also a total team consciousness.  Each player on the squad needs to recognize the co-dependent nature of his strengths and weaknesses, and learn to play with the team.

Essential to this is recapturing the attitude and urgency of the Hoeppner-era teams.

How important is a passing duo to an under-developed squad?  The Crimson Quarry says it best: "a quarterback like Lewis, particularly if armed with a great receiver like James Hardy, can be an equalizer between a program like IU and more talented teams."

To reinforce this point look at the statistical difference between the Indiana passing offense in 2007 and 2008:

To attempt to restore the chemistry to the passing game, Bill Lynch has moved Ben Chappell to the starting position at quarterback.  The junior quarterback played in 11 games last year -- alternating with, and ultimately replacing an injury-laden Lewis.  Chappell completed 80 passes for 1001 yards, but ended with a completion percentage just over 50 (52.3%).

Compared to Lewis, Chappell has a stronger, more accurate arm -- 15 of his completions in 2008 were for 15 plus yards, and 7 sailed over 25 yards -- a feature Bill Lynch will use to force opposing coverages to play soft.

Lewis, curiously, just might end up being his top target.  He's officially been lining up at wide receiver in spring ball, a move Lynch hopes will better utilize his raw speed and athleticism.  (Still, count on seeing Kellen back behind center -- especially in goal line situations). 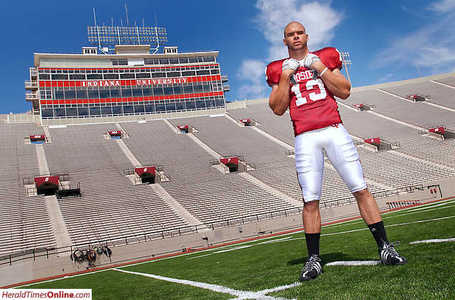 As new talent is up and coming at the receiver position, Coach Lynch has taken the liberty of moving a few underutilized athletes around.  As The Crimson Quarry reports "Four receivers, most notably Ray Fisher, are moving to the defensive backfield."

Overall seven players are moving from offense to defense:

The motivation for the switch is obvious.  Indiana got burned time after time last year in the backfield.  By loading up the secondary Lynch hopes to preventing opposing offenses from running away on big plays.

Will the switch make a difference?

Absolutely, although to stay in games IU will need some help from Jarrod Smith and Milton Owens.  These two former offensive line powers, have switched to defensive tackle.  Former running back turned linebacker Trea Burgess should also add some speed to the midfield.

Overall Indiana's spring mission is clear: keep opponents from breaking out large point spreads by stacking up the defensive slate.

What's at stake?  As The Crimson Quarry notes:

"Bill Lynch certainly has more skin in the game than any of us.  A bad football season will ruin a few Saturdays for fans, but Lynch's career is on the line.  Another season as horrific as 2008 almost certainly will cost him his job, and any sort of losing season will create some pressure."

The Hoosiers have a good chance to open the season 3-0, if they can shut down this MAC Conference power.  Not only will an undefeated start help neutralize a difficult bottleneck (at Michigan, vs. Ohio State, at Virginia), it also will give the Big Ten a foot up in our continuing attempts to justify our automatic BCS bid.

New renovations at Memorial Stadium won't catapult it onto the list of the nation's toughest venues, but it will give tailgating fans an actual reason to go inside.