Arrelious Benn in the 2009 Offseason: You Don't Know Me

Share All sharing options for: Arrelious Benn in the 2009 Offseason: You Don't Know Me

Shout out to Ben Folds there, but truly I say to you, Big 10 fans, you really don't know Arrelious Benn. At least not the way he and everyone else expected you to know him. This 5 Star All-American from Washington D.C. came to Champaign-Urbana as one of Ron Zook's prize recruits. Blessed with a chiseled 220 lb frame and a defensive back killing mentality, Benn showed off his tremendous potential during the Illini's Rose Bowl run, catching 54 balls for 676 yards.

But the struggles of 2008 took the national spotlight away from Illinois's standout wide receiver. Illinois and it's highly (over?)rated offensive coordinator Mike Locksley struggled to generate a consistent offensive attack, relying on high risk passing routes that just as likely generated interceptions as touchdowns. So while Arrelious was busy earning 1st Team All-Big 10 honors with 67 catches, 1055 yards, and 3 touchdowns, the Illini were showing an astonishly inability to score in the red zone and avoid late game meltdowns. 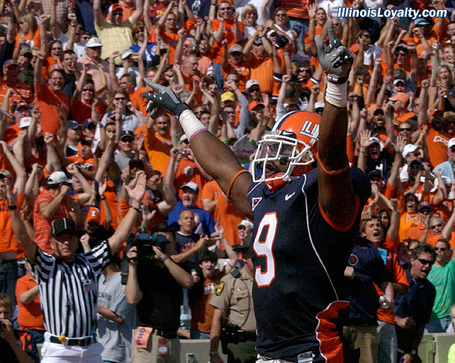 Brent Musburger, the venerable announcer, commented this year that Benn "was just on loan from the NFL," showing an obvious awareness of the talent and capabilities possessed by the junior wide receiver. But it begs the question:

What is Arrelious Benn doing this offseason to improve?

An early interview expressed awareness of the make-or-break situation. When asked about the reasons for the struggle in 2008, Benn mentioned the lack of leadership:

"Put that on me," Benn says. "I know I will be a main leader for the team this year. We used to clap and get it up as a team after weightlifting sessions my first year here. But we got away from that last year. We have gotten that back. I can tell most of the selfishness is gone. We have [weeded] a lot of those kind of guys out of here."

Those strong words speak to the non-physical side of football, an aspect the Illini struggled with. Even with offensive standouts in Williams, Benn, Jeff Cumberland, and offensive lineman Xavier Fulton, the 2008 Illini lacked the heart and killer instinct of the 2007 squad. It is up to new offensive coordinator, TCU's Mike Schultz, to develop a stronger chemistry. Apparently Schultz isn't changing the system very much, but straying away from the high risk plays of last year is a good start.

The Illini have been the 2nd worst Big 10 football program of the last 10 years, which is why Benn's recruitment was such a coup for Zook. Can this physical freak follow up on his promise to lead the Illini in the right direction and at the same time raise his own draft stock?