Navarro Bowman in the 2009 Offseason: And Another One

Share All sharing options for: Navarro Bowman in the 2009 Offseason: And Another One

Following in the footsteps of other accomplished players can be career damaging and ego shattering. Look at the success rate of Denver Bronco quarterbacks after Elway and the public's perception of these signalcallers. So what if Cutler leads a comeback? The fans will only talk about his undeservedly brash attitude and the dumb interceptions hes thrown the last couple years.

It was into this similar situation that Navarro Bowman stepped into at State College. Linebacker U, flush with Arrington, Connor, etc, is one hell of a pressure packed place to play in the crouch. But this 230 pound outside linebacker stepped out of obscurity and into the spotlight with his 2008 performance. Beginning with an 11 tackle Temple game and finishing with a bone crushing hit on Brian Hoyer (3 minute mark), Bowman was named 1st Team All-Big 10 and placed on the 2009 Lombardi Award Watch. 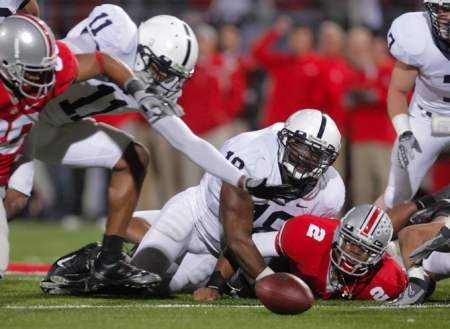 How did this 230 lb combination of quickness and strength become a household name? By disrupting everything, all the time. Passes were deflected, backs were tackled for loss, and the huge expectations placed on Nittany linebackers were lived up to. He's fast enough, reads plays well, and shrugs off blocks easily. It didn't hurt to have All-American Aaron Maybin dominating in front of him, but Bowman made enough individual tackles to get noticed. Black Shoe Diaries compared his impact to the legendary Arrington. With all the success and accolades garnered...

What is Navarro Bowman doing this offseason to improve?

All signs point to another successful season for the PSU linebacker. In 2009, the uber-talented LB Sean Lee, injured all of last year, will team up to give PSU the best 1-2 linebacker combination in all of college football. An easy early conference schedule will probably again place the spotlight on an undefeated Happy Valley team and its All-American defenders. It doesn't hurt that Bowman is ideal size (6' 1'' 230 lbs) or that his disruptive ability is the ideal OLB trait (unlike say, Laurinitis, who was known for compiling assisted tackles).

Not everything came up roses however. After Penn State started undefeated last year, the team came under tremendous local and national scrutiny. Whatever shortcomings that existed for JoePa's squad were quickly exposed against Iowa and Southern California. Bowman struggled against Iowa and was a non-factor against the Trojans as everyone realized the Nittany Lions weren't a BCS Championship caliber team. The off-season challenges are two fold for Paterno and his top defender: 1) Ingrain the belief into players that PSU is here to stay as a national power and 2) install a hunger into the defense to improve and get faster, using the USC ass thrashing as motivation. Bowman is physically more than competent, but it will be his defensive leadership and big-game play that will fall under intense scrutiny this year.