As RRY2 (RichRod Year 2) rounds into form, Michigan fans can rightfully feel more confidence in their program than last year. The Spring Game answered some burning questions and not a moment too soon. RichRod, it seems, can make the spread option work effectively using "his" players and Michigan, with it's national top 10 recruiting class and 50k attendance at the Spring Game, is still Michigan after all.

But there are other bigger questions out there, ones that will not be answered for quite some time. How will Tate Forcier's small frame hold up against Big 10 defenses? Will the experience of Brandon Graham and Obi Ezeh, plus the supersized frame of William Campbell, signal a revamped Michigan defense driven to succeed where last years unit failed? Which wide receiver will emerge as the home run hitter, the guy who takes 3 yard screen passes to the house? 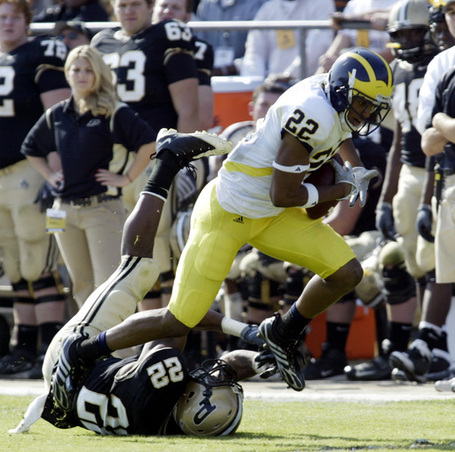 Although it was just the Spring Game, Michigan's offensive line showed good knowledge of the Spreads blocking scheme's and generated numerous holes (see an MGo Theory on the O-Line here). Brandon Minor will be the feature back and Forcier's running also helps, bringing an element obviously lacking from last years Maize and Blue attack. As Brian from MGoBlog has noted, defenses did not pay attention to the QB run option last year, mainly because Threet and Sheridan were slow and lacked elusiveness. Add Forcier's improved throwing mechanics to his scrambling ability and you have a possible four year Spread starter ala Pat White. We all know that offensives get bogged down against the hard hitting offenses of Ohio State, Michigan State, Penn State, Iowa, etc. But the RRY2 experiment seems to have gained a leader and quite possibly, some bite too.

I had numerous discussions last year centered on the Michigan defense. Were they as bad as the numbers indicated? Were the struggles directly attributed to the problems on offense? Should blame lie at the feet of Scott Shafer, the now departed defensive coordinator? 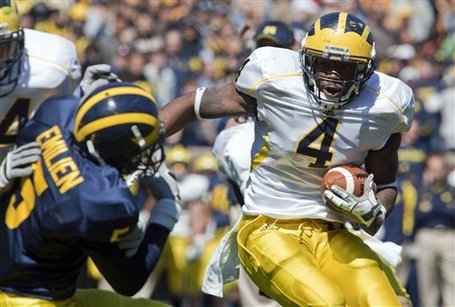 The defense, led by Graham and possibly the 5 star DT Campbell, will have to find its identity early. Let me clarify that statement. For years, no one could run on Michigan. Lamar Woodley, Alan Branch, Gabe Watson...These monsters used their size and athleticism to stuff running games. Last year, Javon Ringer, Juice Williams, Evan Royster, and Beanie Wells all wore down the Michigan front seven for big days rushing. This year's 3-4 scheme, brought in by new defensive coordinator Greg Robinson, will be under intense scrutiny. As GSimmons of Three and Out hypthesizes, the 3-4 is meant to:

1. Get athletes on the field
2. Create a 3 way go situation to compensate for putting more specialty guys on the field
3. Allowing defense to run any type of coverage scheme they want.

Will the change in formation stop the Wolverines from giving up numerous long pass completions like last year? Will "Every Game, I Give Up a Touchdown" Stevie Brown learn how to take correct angles in coverage?

The Wolverine's won't be favored in each of their traditional rivalries (Notre Dame, MSU, OSU), and some logical MGo commentators are predicting 7-5 for RichRods 2nd year. These medium expectations make it tremendously important that Rodriguez win his in-state non-conference games and avoid the deflating Utah/Toledo type losses. The home opener versus the Bronco's, who defeated Illinois at Ford Field last year and pose a threat with veteran QB Tim Hiller, will pose a stiff test for the Wolverines.

Height and Weight of recent starting Michigan quarterbacks, beginning in 1990: