Debates on Draft - Is Greg Paulus Really a Good Thing for the Wolverines?

Share All sharing options for: Debates on Draft - Is Greg Paulus Really a Good Thing for the Wolverines?

[Ed. It's been public bathroom talk for 24 hours now.  Ex-Duke basketball laureate Greg Paulus has been given the "opportunity" by the University of Michigan to extricate his lone remaining year of elegibility, and attempt to live out his dream of playing college football.  So...] 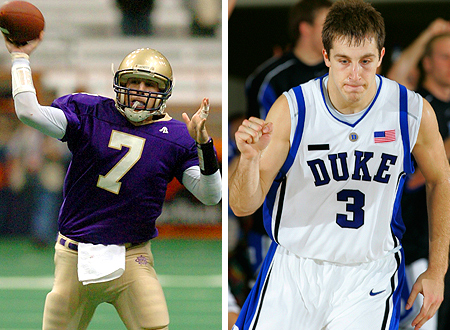 Is Greg Paulus Really a Good Thing for the Wolverines?

LB:  Picture this: I'm outside on the patio in the sun surrounded by cherry blossoms in a t-shirt and Birkenstocks.  I just opened up a Red Stripe.  Could life get any better?

LB:  But things are looking up for you my friend.  I think I found you a date.
GF: With...
LB: There were these girls standing in front of the Wexner Center holding up homemade signs that said "Honk, if you love vaginas."
GF: And you honked.
LB: It was the polite thing to do.
Spring opener tomorrow at Huntington Field, Blue Jackets in the playoffs, life is good.
GF: You know why else life is good?  Greg Paulus might be coming to Ann Arbor.
LB: So I've heard.  And I suppose you think that's a good thing.
GF: I know it's a good thing...Even the illusion of it is a good thing.  A team depleted at the most important position gets a possible jolt from a former Gatorade Player of the Year.  Even if he plays backup, he makes the team stronger.
And it lights a fire under Forcier's ass.  If Tate doesnt start because Paulus turns out to be legit, he's got 3 more years of eligibility.  He's brought in slowly, he gets some playing time, and he learns to be humble.
LB:  Let me ask you a question...if this guy can't even win the starting quarterback job at Duke, how is he going to play for UM?  I know they're thin, but they still boast a roster packed with three, four, and five star recruits.  Duke fields one, two, and (possibly) three star talent.
GF:  So, Tate starts, you get a possible 4 year starter, and you have depth.
LB:  Paulus is rusty.  Look at Mitch Mustain.  8-0 as a starter for Arkansas.
Sits on his ass for two years, and volia -- he's mediocre.
GF: I dont give a damn if he's rusty or amazing.  You're missing the big picture here.  If Paulus never gets himself in this situation, Michigan is right where they started.
LB:  See, I'm afraid this whole thing might cause Forcier to lose valuable reps.
Can a single player really make that big of a difference in one season?
Terrelle Pryor, Mark Sanchez.  These are talented guys.  But a young player needs time to develop.  It's experience that leads to results.
GF: It's not like Forcier is leaving -- although some have insinuated that Paulus might inspire him to transfer.
LB: Best case scenario -- Paulus passes for 5,000 yards.  He leads the Wolverines to a 9-2 season -- then he gets a taste of Ohio State's Defensive Ends.  He makes some bad decisions, lays a few floaters out over coverage, and UM is 9-3.  Just good enough to land them a formidable bowl opponent, say Tennessee.  Again, Paulus faces a fast, and fundamentally sound defense, his inexperience shows, and the Wolverines drop the bowl.  What do they have to look forward to?  Another year with a virgin behind center.
I'd rather see them build behind a player that is going to be their future.  Go 7-5 with Forcier, let him get used to the noise, speed, and pressure of the game.
GF: RichRod needs to hold onto his job.  Option quarterbacks get hammered.  They have small frames.  They run at dangerous angles.  It's good to have a couple.
LB: I agree that it's good to have a stable at any position.  But i'd rather start building with enough tools to finish the job.  If Paulus takes the starting job the Big House will be roofless in 2010.
GF: Again you're missing a valid point.
LB: Sell me.

GF:  Forcier has shown how young and inexperienced he is.  Check out his Facebook Status.  He's offended by Paulus, he's been essentially called out by RichRod.  People are talking transfer already.  But they miss the boat.  Forcier is a small, freshman QB who thinks he's God.  This will humble him.

LB: Let me ask you this.  If Rodriguez goes 4-8 this season, does he get canned?
GF: It depends on what happens with Paulus.
LB: It's a yes or no question -- I don't care who starts, 4-8, is Rich Rod gone?
GF: No.
LB: Right.  So, Rich needs to look at least two seasons out.  He needs to invest in the systematic future of the program, not just inserting a short-range firecracker.
GF: But if he goes 4-8, he will begin losing support from Michigan fans.
LB:  Suppose Todd Boeckman had lived up to expectations last season and Terrelle Pryor only saw the field in selective, mop up, increments.  Can you really argue Pryor would be that much farther ahead in 2009, than he was when he first took the starter's job in 2008?
GF: No. But 2009 is huge.  And it has become bigger, thanks to Paulus.
LB:  Okay, so here's where we're at.  I think that -- seeing how he's all but guaranteed two seasons at a minimum -- Rich Rod needs to invest in momentum that will pay dividends two years out.
You believe there's more to 2009 than meets the eye, and that Michigan needs to do everything they can to put up as many Ws as possible.
Neither is wrong.  They're just two different ways at looking at the situation.
GF:  You're too kind.  Everyone else is using this situation to bash Rich, Michigan, the spread, et. al.
LB: I'm charitable for two reasons: First, I want to see UM back at the top of the conference.  It's good for the Big Ten, good for the Rivalry.  Second, college football (like life) is a one-shot enterprise.  If Paulus lands the reins and takes Michigan to a 8 or 9 win season, the fans will be satisfied, and Rich Rod will buy himself more time -- even if he does struggle in 2010 with an unnecessarily green Forcier.
If that's the case, I won't be able to argue that keeping the attention on Forcier would have led to a better long-term product.
Although, that's what I believe, I can't prove it.
So, from a Buckeye to a Wolverine, I say, best of luck.
GF:  A Buckeye who is gracious and logical.  What next?  A Duke point guard playing quarterback for Michigan?
LB: So, it looks like we've about wrapped this one up.
GF: One more thing, courtesy of our friends at BGHP.  (Editor's Note: The football discussion ends here].  You know the girl in the progressive commercials?  The one in the white room. 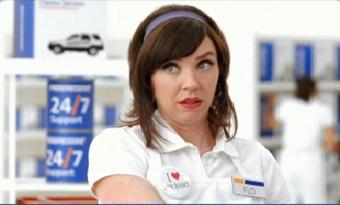 Apparently her name is "Flo."

LB: I fast-forward through most commercials on DVR.  But, yeah.  I think so.
GF: A bunch of us are trying to figure out if she's hot.  Care to enter the fray?
LB: Umm...She looks like she belongs behind the counter at a chain coffee shop in Seattle.  Too much mascara, too little girl next door.

GF: I agree.
LB: She looks like she's on too much allergy medication.
GF: Right, or like a vampire.  Hey, didn't I see you in twilight?

LB: Glad we got that settled.  [Editor's Note: No more drinking while we work on this series.  Okay, I guess I was the only one drinking.]