This is the biggest thing about the Gophers this year: they'll be playing outside. Don't believe me? Read Tim Brewster's Twitter Feed. It is. After twenty-seven relatively unsuccessful seasons playing in the Hubert H. Humphrey Metrodome, the Golden Gophers delivered one last epic failure against Iowa to close the building down. Now they move outside to play in TCF Bank Stadium. The facility is smaller, but has room to grow. There is no way that this isn't a net positive for Minnesota. The dome was a horrible place for college football. The new stadium has to, HAS TO, be better. 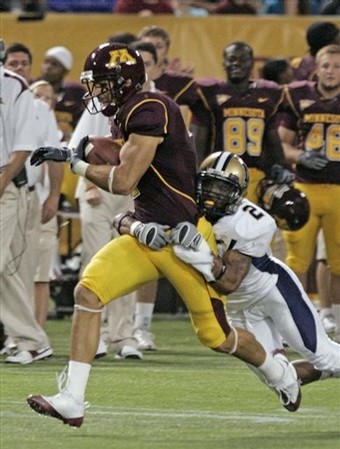 You can not overstate the season that Eric Decker had last year. He led the Big Ten in receiving yards. He led the Big Ten in receptions. He also decided to come back for his Senior season. Rising-Junior Adam Weber, a year older and wiser, returns as starting QB. Reports from the Gophers' scrimmage seem to indicate that his shoulder is healed from an off-season surgery. It also looks like the offense will be more wide-open this season. That sounds great for Decker, unless...

Baby, It's Cold Outside

Do you know why the Gophers went indoors in the early-80's? Outside in November in Minnesota can be downright ridiculous. There's a reason that the Big Ten and the NFC Central/North gained a reputation for defense and ground games. It's not realistic to rely on a passing attack in cold swirling winds/snow. The night game against Michigan State on Halloween and the game against Illinois the following week could be fun to watch. Nothing beats football in the snow - as long as you're not the one responsible for throwing the ball in the wind and snow.

The Gophers play for four separate traveling trophies, the most in the country (by my unofficial observation). They somehow managed to lose to the worst Michigan team in our lifetimes (No one truly lived before 1979. ESPN told me so) - so much for the Little Brown Jug. They choked one away to a horribly disappointing Wisconsin team - so much for Paul Bunyon's Axe. 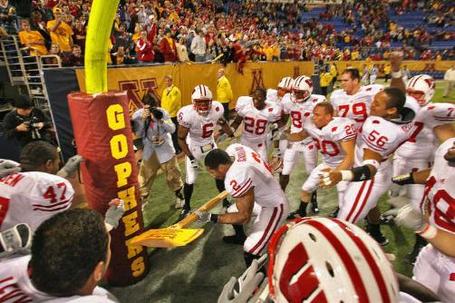 We already discussed the Iowa game - Floyd of Rosedale crossed the border again. The schedule didn't provide the chance to play Penn State for the Governor's Victory Bell, but it's hard to imagine that would have ended well - the trophy still resides in a broom closet in State College, PA. Add in a loss to Kansas in the Insight Bowl, and the Gophers went oh-fer when it came to shiny things that go on a shelf. Penn State is back on the schedule this year, while Michigan drops off. If Minnesota wants to have any chance at sneaking up on a Big Ten title, it's going to have to win two of those three trophy games. It says here that they don't.

The Gophers play the toughest three game non-conference opening stretch in the conference, then open league play on the road in Evanston. Both Northwestern and Minnesota are talking about THIS being the year that they can take THE NEXT STEP. There is no way that the loser of that game competes for a title (or a bowl in Florida). The winner can still dream. If Minnesota wins, it may well be on to something. If it loses, the schedule is set up for a 5-7 to 7-5 finish.

Minnesota and Indiana are the only two Big Ten schools who have not been selected for one of the league's top four bowl games (Rose/BCS, Capital One, Outback, Alamo) since the Big Ten set the pecking order in 1996. This kind of schedule makes it unlikely for that to change in 2009.