I've been a little fired up since Rivals.com's Tom Dienhart ranked the Big Ten coaches and lobbed Pat Fitzgerald in behind Rich Rodriguez and Bret Bielema.  This, naturally, is because you'd be hard pressed to find any coach in the country who is doing more, with less.

Sure, Fitzgerald bleeds purple -- his youthful visage smeared with Evanston sweat and soil from his days as a Nagurski award winning linebacker.  But his triumphant return to his alma mater -- fast-forwarded by the tragic death of Randy Walker -- has given the brains a little more brawn. 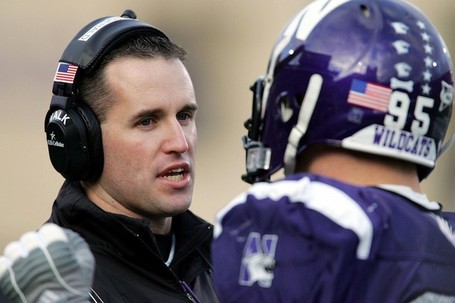 Who is this guy?  Don't ask Tom Dienhart.

Though resigned to a loss, Northwestern ended 2008 on a high, after sweeping its regular season out of conference schedule, wringing out a 5-3 record in the Big Ten, outplaying pre-season national championship contender Missouri for sixty minutes in the Alamo Bowl, and ending the season ranked 23rd.  The Alamo in particular was a proud night for the conference as the underdogs dominated the air, passing for 104 yards more than the high-flying Tiger tandem of Daniels/Maclin, and controlling time of possession (35:20 to 24:40).

A heartbreaking overtime loss hasn't sapped momentum heading into 2009.  With the exception of Iowa, and Ohio State, no Big Ten team ended the season on a higher note.

But good feelings breed heightened expectations.  At least one source ranks Northwestern in the 2009 pre-season Top 25, and Lake the Posts -- the definitive source on Wildcat happenings -- makes it clear that anything but 4-0 this season in out of conference play "will be a major disappointment."

So, is Northwestern a program on the rise, or an empty promise?

The good news is up front, almost the entire O-Line is back: Offensive Tackles Al Netter, and Desmond Taylor, Center Ben Burkett,  and Guard Doug Bartels, will have the chief responsibility of anchoring a young backfield.  Their chemistry, and ability to open lanes is essential to the success of Northwestern's spread offense.

In fact, the Wildcats' ability to sustain production in 2009 can be boiled down to three things: 1. Re-establishing the run, 2. Developing Kafka's arm, and 3. Training target receivers.

Like long-sleeved Under Armor, a rushing offense is essential to compete in the Big Ten.  Last year Northwestern had the eighth-best ground game in the conference, led by Tyrell Sutton and Mike Kafka.  The loss of Sutton and the 890 yards he contributed, and the ascention of Mike Kafka to an everydown (and therefore pass-first, run-second) quarterback, means the Wildcats will have to find a way to account for some 1,000 yards of production.

Sophomore Scott Concannon was listed first on the Depth Chart headed into spring practices.  Although he saw the field in eight games in 2008, he was given dramatically little responsibility, meaning Fitzgerald will depend on a virtual rookie to pin down yardage in the hole. 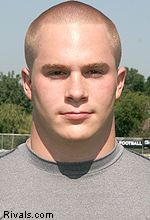 Is this the face of the next Tyrell Sutton?

Meanwhile, Mike Kafka, who demonstrated a daring ability to use his legs to salvage broken plays in 2008 will be called upon to develop his passing abilities.  As we wrote last month:

Although Kafka completed a solid 69.6 percent of his pass attempts in 2008, that rating dropped dramatically (to 42.9 percent) when driving the gauntlet between an opponent's 39 and 21 yard lines.  Of 46 attempts, he completed 17 passes for over 15 yards -- but just two soared for over 25.  To take advantage of mismatches in opposing coverages, look for Kafka to improve his arm strength and rhythm.

Because he stands to take over every series, look for Kafka to mature into a pass first, run second mentality, sustaining quick slants in Northwestern's swift strike spread attack.

To pick up blitzes, and hit short-yardage routes, Kafka will need to tighten his timing, loosen up his arm and relax his reads -- preventing misfires.  If he pulls it off, he'll quickly become one of the most versitile quarterbacks in the conference.

Likely targets are Freshman Demetrius Fields, Brendan Barber, and Martin Bayless, as well as Sophomore Charles Brown.  Alarmingly, Brown -- the only one with any experience -- barely finished in the top fifteen receivers in 2008, pulling down two receptions for fourteen yards.

The good news is on the other side of the ball, where Northwestern returns eight starters including Defensive Tackle Corbin Bryant, Defensive End Corey Wootton, Middle Linebacker Nate Williams, Outside Linebacker Quentin Davie, Cornerbacks Sherrick McManis, and Jordin Mabin, and Safeties Brad Phillips, and Brendan Smith.

In a league punctuated by dominating defenses, these returning starters formed the vertebrae of the league's fifth best in 2008.  Particularly stingy against the rush (fourth in conference) and at the goal line (fourth in conference) the 2009 squad needs to match the 20.2 points per game allowed last year to keep a startup offense in the game. 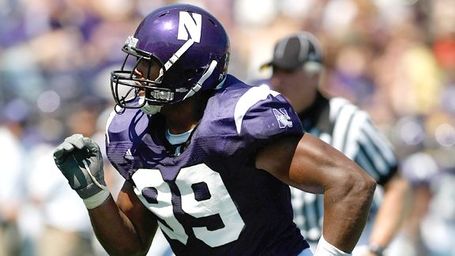 Corey Wootton led the Wildcats in tackles for losses in 2008.

Expect to see a defense that attempts to tighten up on the pass, as more and more Big Ten offenses (Michigan, Indiana, Ohio State, Penn State) expand their repertoire.  Particularly important will be the play of Safety Brad Phillips, who led the Wildcats with 109 tackles in 2008, and Corey Wootton, who led the purple with 16 tackles for losses in 2008.

If Northwestern wants to take the "next step" in the conference pecking order, it has to defeat similarly situated opponents. This Big Ten opener should give the Wildcats everything they can handle as a veteran Minnesota team that can play pitch and catch (via Weber and Decker) as well as anyone rolls into Evanston.  Win, and you're undefeated heading into October.  Lose, and you're Insight Bowl material.

Northwestern is in the previously enviable position of avoiding both Ohio State and Michigan in the same season.  What once would have been a Godsend, however, is a mixed blessing in the new Big Ten -- where Penn State looms as tall as anyone.