#6 Wisconsin (11-1, 7-1) traveled down to Orlando to take on #12 Arkansas (10-3, 7-1). The Badgers, led by first year coach Bret Bielema, were built on a hard nosed defense that ranked 4th in the nation and a rushing attack averaging 175 ypg. Houston Nutt's Razorback team, fresh off a close loss in the SEC Title Game to eventual national champion Florida, followed a similar formula to success. The Cardinal and White possessed the nation's 4th best rushing attack and a vicious defensive front.

Arkansas's offense revolved around All-World RB Darren McFadden and his talented backup, Felix Jones. These backs, both NFL quality players, were placed in I-Form and Wildcat offensive schemes to showcase their speed and elusiveness. The defense was anchored by Keith Jackson and Jamaal Anderson, defensive linemen who would both be drafted in the 2008 NFL Draft. Quarterbacks Casey Dick and Mitch Mustain were the weakness of this Arkansas team, as neither had shown the ability to throw the ball down the field consistently. 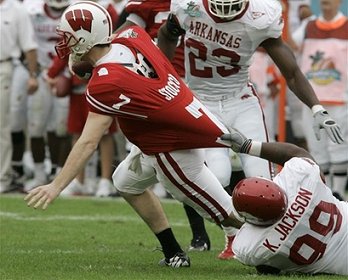 Bielema's offensive line was one of the strongest in the nation, led by the top pick in that year's draft, Joe Thomas. These monsters blocked for freshman PJ Hil, a 240 lb. beast who ended the season with 1,569 yards rushing. Wisconsin's secondary, including CB Jack Ikewuonu, was also viewed as an overwhelming strength for the Badgers.

I was at this game and it was a very well played game, especially defensively. I've never seen a battle in the trenches like I did that day and there was no question that each team gave it all they had. The biggest play of the day exemplified that. The Badgers stopped Darren McFadden for most of the day, but on his first carry he broke free for a big run that appeared to be an easy 54-yard touchdown run. UW CB Jack Ikegwuonu came out of nowhere to run McFadden down at the 9-yard line. Arkansas ended up not scoring. It was that kind of defensive effort that won the game for Wisconsin. (ed note: see below for video of the play)

Ikegwuonu set the tone for the game with his early stop on McFadden; Wisconsin would not be intimidated by the sheer speed of the Arkansas backfield. Instead, the highly ranked defenses would quickly turn this game into a war of attrition. The difference in the game the turned out to be Capitol One Bowl MVP John Stocco, Wisconsin's veteran quarterback. With the running game stalled (-5 yards rushing for the game), Stocco made two perfect throws for touchdowns to give the Badgers a 17-7 halftime lead. His 206 yards passing were the offensive highlight of this defensive battle.

The ineffective Razorback passing (14-31, 139 yards, 2 INT's), plus 123 yards in penalties, showed a rattled team with little offensive versatility and a gaping hole at quarterback. Wisconsin weathered a late TD from Jones to pull out a 17-14 win.

The Arkansas punter, doing karaote/meditation for so long it was awkward...then getting his punt blocked.

Felix Jones, 150 yards, 1 TD. His combination of straight line speed and quickness were obvious in 2007; now he plays for the Dallas Cowboys.

Did this game teach us anything about the Big 10 or SEC? I think so. Wisconsin, a team that yearly embodies all of the generalities about the Big 10 (slow, powerful, unimaginative, somewhat antiquated offensive philosophy), beat an extremely talented and fast SEC team, but only scored 17 points. In their five games this decade against the SEC, the Badgers have went 2-3, each game being a low scoring affair. Has the Badger defense consistently showed their mettle? Definitely. However Wisconsin has averaged 16.5 ppg in the five SEC contests - not quite an affirmation that plodding power works against the speedy SEC defenses.