Share All sharing options for: Ohio State "Sizzles" in Scarlet/Gray Game in Front of All Time Largest Spring Crowd

Having just returned to the creature comforts of my Victorian Village apartment from the 85 degree hot box on the banks of the Olentangy, I thought I'd give a quick sketch of this afternoon's Scarlet & Gray game; one of six Big Ten spring contests today.

Pryor the Passer?  No kidding.  After a 2008 season saved by his gazelle-like glides to the outside, Terrelle showed he's come quite a way in the offseason.  Standing firm in the backfield, Pryor routinely relied on his legs to evade pocket collapses, before planting his feet, turning on his hips, and delivering surprisingly sharp spirals to a number of incipient targets, like Taurian Washington (4 catches, 92 yards, 1 TD), who pulled in a 44-yard touchdown completion.

In just two quarters of play Pryor was 13-18 racking up a career high 191 yards in the air for the Gray.  Sure, it was against a mixed first and second string defense, but his progress can't be discounted. 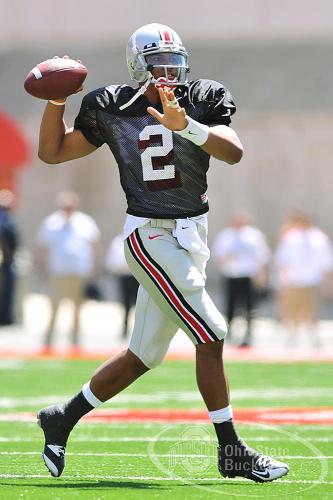 Shake and Bake.  This team is athletic and (gasp!) quick.  There's a noticible difference in explosiveness, particularly:

Still, not everyone showboated.  I came away a little disappointed with:

Where Have You Been? Fifth-year senior RB Marcus Williams (94 yards, 6 carries).

Overall, this was a surprisingly encouraging performance for the new Buckeye offense.  After watching three different receivers (James Jackson, Ray Small, Taurian Washington) amass over 50 yards, and one more come close (DeVier Posey), I'm cautiously optimistic that this team might have the receiver corps to present a more dynamic attack.

A pass presence would be a Godsend, as the running corps continues to look solid -- although predisposed to the outside lanes.

(More on this when I drop Ohio State's 2009 Spring Preview installment later this week).